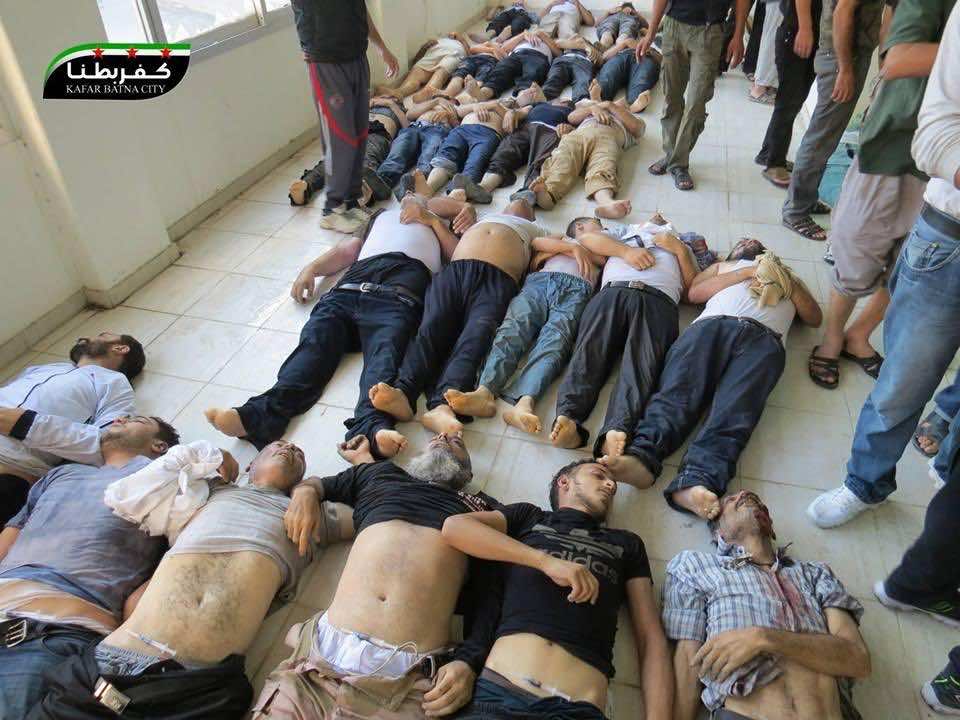 Opposition activists in Damascus reported that sarin gas may have been used again, and posted several videos of people affected by the attack, indicating sarin or even more dangerous chemical attacks. Syrian rebel fighters  also have alleged that the Assad regime launched “a series of chemical attacks” on the Damascus suburbs of Adra and Duma on Tuesday morning.

Pictures and videos stormed the social network claiming that Assad used chemical weapons against the civilian. Most of the pictures for children who suffered from suffocation due to the inhalation of toxic gases

Video posted on YouTube purports to show victims suffering from a range of symptoms associated with chemical weapon use.

On other hand, United Nations inspectors arrived Sunday in the Syrian capital on a mission to investigate the alleged use of chemical weapons, as Syria’s government vowed to fully co-operate with them.

Syrian plainclothes security men whisked away the 20-member team, led by Swedish chemical weapons expert AkeSellstrom, from a crush of waiting reporters and cameramen as they arrived at their five-star hotel in the heart of Damascus.

Each side in the conflict has accused the other of using chemical weapons. Outside nations backing the government or the rebels have gotten involved, generally backing their ally’s version of events. President Obama has declared that a chemical attack would be a “red line” that could trigger U.S. intervention in Syria.

The Syrian military is known to possess a considerable stockpile of chemical weapons, according to international experts, though Damascus has never publicly acknowledged having such arms. But President Bashar Assad’s government has declared publicly that it would never unleash such weapons against its own people, even if it did possess them.

The Syrian Coalition calls on the UN chemical weapons inspection team to investigate Ada in rural Damascus for Assad’s use of toxic gas against civilians.

Russia, a major ally of Assad, has said its investigation indicated that it was the rebels who have deployed sarin gas manufactured in “cottage industry” conditions. The opposition says the Russians are mistaken.