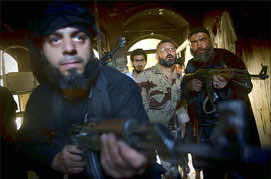 Officers from the Directorate General for Territorial Surveillance (DGST) arrested four members of a group operating in Tiznit, Fez, Meknes and Taounat, the interior ministry announced on Friday (August 16th).

One of the most prominent activists on jihadist websites reportedly organised the cell after being tasked with recruiting for al-Qaeda in the Islamic Maghreb (AQIM).

“The leader of this cell, who was able to recruit Moroccans … some of whom have links with fighters who operate under the banner of al-Qaeda in Syria, strongly urged them to perpetrate acts of sabotage against state institutions, and was planning to carry out a targeted terrorist operation in line with AQIM’s agenda,” the ministry said.

According to analyst Ahmed El Miloudi, the arrests highlight the growing links between AQIM and radical groups in Sahel countries.

“Despite the military intervention in northern Mali, there are now several indications that the presence of fundamentalist groups in this region is continuing to stir up enthusiasm among young people in the Maghreb and the entire Sahel-Sahara region,” he told Magharebia.

“After Afghanistan, the Sahel is still an alternative support base for AQIM, which is still capable of striking at any moment, in particular through its close links with the terrorist networks that it is trying to establish in countries neighbouring the Sahel,” he said.

Investigations have revealed that Libya, Mali and Syria were among the destinations for recruits. Moroccan officials earlier noted that terror recruits were sent to the Sahel through the Algerian-Moroccan border with the aid of al-Qaeda, which reportedly “facilitated this operation in return for sums of money”.

According to Morocco’s interior ministry, the border with Mauritania is another channel through which Moroccan volunteers exit the kingdom to join al-Qaeda groups.

The Sahel connection means there is a risk that Moroccan radicals could “become more dangerous”, sociologist Kamal El Ghorfti noted. To supplement security measures, a cultural approach is needed to combat the indoctrination of young Moroccans into the ranks of AQIM, he added.

The cell, which operated in Casablanca, Nador, Laayoune, Guercif and Kelaat Sraghna, sent more than 20 young Moroccans to northern Mali. Once in Mali, the recruits were trained “to take part in terrorist operations planned to be carried out in the region later”, the interior ministry said.

Over the past decade, Morocco took down at least 120 terrorist cells indoctrinated in al-Qaeda’s jihadist ideology.

Security services since 2003 have also thwarted more than 260 terrorist operations and arrested some 1,300 terror suspects.