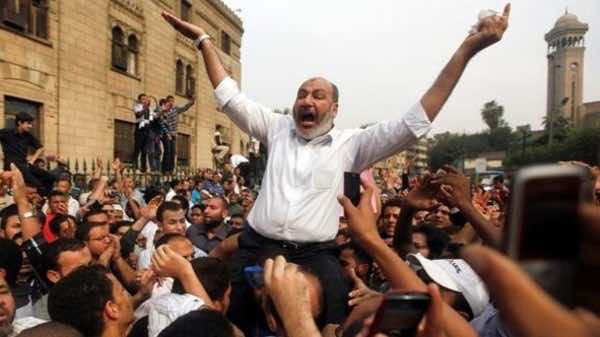 A firebrand Egyptian cleric and television preacher has denounced the Muslim Brotherhood after his arrest on Wednesday near the Libyan border.

Safwat el-Hegazy told investigators that he was not part of the Muslim Brotherhood and that if he could go back in time he would have never supported them, a security source said.

“It’s not because they are terrorists and encourage blood shedding, but it is because they don’t work well and cannot do anything right,” Hegazy was quoted as saying.

Hegazy who is wanted over charges of instigating violence was captured early Wednesday at a checkpoint near the Siwa Oasis, near Libya. He reportedly tried to flee the country across the Libyan border.

The cleric also denied that he approved of ousted- President Mursi’s actions and added that he was neither for nor against his removal or trial.

Hegazy also said in his statements that he has always called for pacifism and had no idea of the Brotherhood’s violent plans.

He also told investigators that he wasn’t aware of the presence of weapons in Rabaa al-Adawiya square, where Islamist supporters of deposed President Mohammad Mursi held a sit-in.

Hegazi threatened on August 6 to “break the necks of former regime figures and symbols of the National Salvation Front” if ousted President Mohammad Mursi is hurt, reported Al Arabiya.

He was previously reported to have set up an armed militia comprising hardline members of the Muslim Brotherhood.

The militia was allegedly referred to as Egypt’s Free Army and was equipped with military uniform and fire arms, according Egyptian media reports.