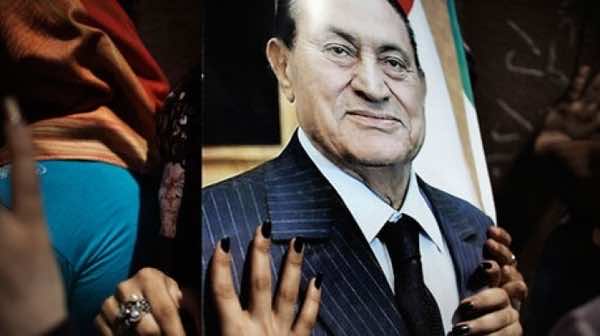 Toppled dictator Hosni Mubarak left jail for under house arrest on Thursday but his release stirred little reaction as Egypt wrestles with the fallout from Islamist president Mohamed Morsi’s ouster.

Mubarak, who was overthrown in a 2011 uprising, was flown from Tora prison in Cairo, a day after a court granted him conditional pre-trial release.

But an order from the country’s interim prime minister, who has additional powers under Egypt’s state of emergency, means Mubarak will stay under house arrest.

The 85-year-old, who is believed to be in poor health, was taken by helicopter to a nearby military hospital, where he has previously received medical treatment.

The spectacle of one toppled president being allowed to leave jail even as authorities hold another — Morsi — at an undisclosed location, has attracted international attention.

But in Egypt, the response has been muted, even from some of those who took part in the uprising against Mubarak.

In the last week, nearly 1,000 people have been killed in clashes between Islamists and security forces after police cleared two pro-Morsi protest camps in Cairo.

The turmoil and uncertainty has left many Egyptians more concerned about the future of the country than Mubarak’s transfer.

“A year ago, it would have been difficult to imagine his release without popular protests against it,” said Barah Mikail, a Middle East specialist at the FRIDE think-tank.

“Today, everything else that is happening has moderated the effect of this release, although that is not to say that Egyptians are indifferent.”

But indifference did appear widespread, with just a handful of people arriving at Tora prison to cheer Mubarak’s release, and not a single person protesting at the scene.

Egyptian media relegated news of his transfer to small items on their front pages or news bulletins, with little discussion of the symbolism of the moment.

After the bloodshed of the last week, most Egyptians have appeared eager to get back to normal life as quickly as possible.

As pro-Morsi protests have dwindled in size, traffic has returned to the streets, at least in the hours before a night-time curfew begins.

The symbolism of Mubarak’s release has not been lost entirely, with some Egyptians on social media networks struck by how their country has returned to a time when Mubarak was free and the Muslim Brotherhood in jail.

“It’s so absurd! The symbolism of this development shouldn’t be lost,” said Shadi Hamid, an analyst at the Brookings Institution.

“What we are seeing is something that is largely unprecedented,” he added.

“It’s a perfect role reversal, as most of Egypt’s first elected leaders are in prison now.”

Adding to the absurdity, both Mubarak and several arrested Brotherhood leaders including supreme guide Mohamed Badie are scheduled to appear before courts on Sunday.

And one of the charges Mubarak faces, complicity in the deaths of some of the 850 people who died during the uprising against him, is similar to that faced by Brotherhood leaders including Morsi and Badie.

They both face allegations of inciting the deaths of protesters in relation to deadly protests that took place during Morsi’s time in office.

Mubarak and Morsi are in quite different situations, however, noted Egyptian analyst Hisham Kassem.

Mubarak “committed numerous crimes… against the country, but managed to hide the evidence, particularly as all the state’s institutions were working for him at the time he was overthrown.”

“The opposite is true for Morsi, who was thrown in prison while all the state’s apparatus were against him.”

Kassem said Mubarak’s release inspired little interest among Egyptians because he remains on trial, and they felt certain his regime is definitively over.

“The symbolic character of this event won’t change the course of things,” he said.

“His leaving prison is a secondary question. We hope that he’ll be punished for everything, but today it’s more important to concentrate on the economy,” Kassem added.

“In any case, the old regime has been brought down, it’s black days are behind us and they can’t return.”