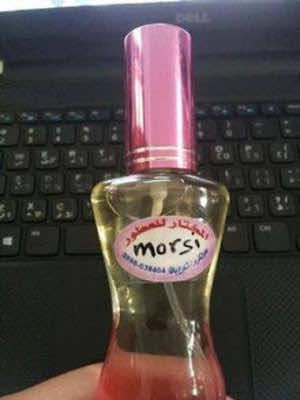 Islambuli Badir, a 36-year-old member of Islamist movement Hamas, was arrested during a raid on his perfume shop in the town of Tulkarem, his brother Abdel Fattah Badir told AFP.

“Men from the security services on Tuesday raided my brother’s shop and confiscated all the perfume bottles that were labelled ‘Morsi,’ then arrested Islambuli and also seized his laptop,” said Abdel Fattah.

“The day after the arrest, my younger brother Qassam, 24, put a sign up on the shop door saying: An apology to customers — our Mohamed Morsi perfume has been seized by the authorities.”

Abdel Fattah said his family learned of the raid and arrest from neighbours and witnesses.

“No one… contacted us to inform us of the arrest, my brother’s place of detention or the charges against him,” he said.

But he added that given the items confiscated, it was presumably because of the name of his Morsi perfume.

The Badirs are known Islamist sympathisers.

Abdel Fattah insisted, however, that the Morsi perfume was simply a business venture that had attracted a lot of custom.