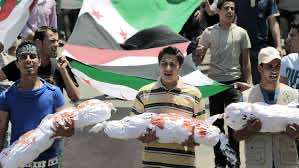 Opposition activists claim that between1,100 to 1,600 people are dead.

The regime began shelling Damascus suburbs of Zamalka, Arbeen and EinTarma around 3 a.m, according to the Britain-based Syrian Observatory for Human Rights monitoring group. These localities have a which has a strong rebel presence.

The heavy artillery and rockets, as well as the grinding roar of fighter jets, could be heard by Damascus residents early on Wednesday.

Khalid Muhammad, an opposition activist estimated that between 1300-1600 people had been killed in the attack.

The United Nations Security Council announces on Wednesday that the use of a chemical weapons attack on Damascus suburb needed to be carefully examined.

”There is a strong concern among council members about the allegations and a general sense that there must be clarity on what happened and the situation must be followed closely,” Argentina’s UN ambassador, Maria Cristina Perceval, told reporters after a closed-door emergency meeting of the council.

On the other hand, Assad allies celebrated the massacre on the street and over the internet by encouraging the regime to make more attacks like this attack in Damascus.

“Tarekkhaddam” wrote on his Facebook wall:” chemical or not, whatever, this massacre represent me ,this is a revenge for what happened in latakia”.

Harasta news page on Facebook wrote: ”finally the chemical came true, under the command of Mr. Bashar Alassad our forces start the attack around 5 ,30 am on Damascus suburb to kill the terrorists”.

A page called the home Martyred reported that more than 500 people killed in the attack and ended the report with the phrase: god bless Syrian army !

Another video had showed people on the streets celebrating the killing of the children.