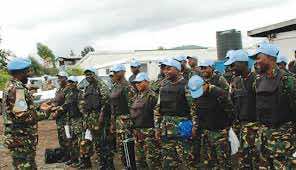 To the outsider at least, the immediate problem with the situation in the Democratic Republic of the Congo (DRC)—a perennial vortex of instability, massive human rights violations and wars both petty and large—is that it defies comprehension. The armed militia factions, opportunistic and often wholly predatory, are many. There are at least 10 such groups in the eastern part of the country alone, which for several years now has been the epicenter of the bloodshed and chaos.

The recent approval by the UN Security Council of two extraordinary measures to deal with the situation in that country—the use of drones or unmanned aerial vehicles (UAVs) to provide reconnaissance of militia activity, and the deployment of an intervention brigade to take offensive measures against the militia groups—is being hailed by most observers as a potential turning point in the country’s recent unhappy history. Though the UN has been careful to present the measures as purely temporary and confined to the DRC, they do indeed constitute a turning point in UN peace missions. Their success—if they do succeed—will undoubtedly lead to their being hailed as “best practice,” and radically change the hopeless trajectory of the Congo.

UN Secretary-General Ban Ki-moon has welcomed the measures as a “comprehensive approach aimed at addressing the root causes of instability in the eastern DRC and the Great Lakes region.” But optimism has necessarily to be tempered, analysts believe.

The 24 February 2013 “Framework for Peace, Security and Cooperation for the DRC and the Region,” which provides the basis for the intervention brigade, does indeed offer a comprehensive approach to the problem. The framework, which the African Union assisted to put together, was signed in Ethiopia by leaders from the DRC, Angola, Burundi, the Central African Republic, the Republic of the Congo, Rwanda, South Africa, South Sudan, Tanzania, Uganda and Zambia, in the presence of Mr. Ban, who acted as one of the guarantors. The framework speaks of the suffering in the country engendered by “recurring cycles of conflict and persistent violence by armed groups, both Congolese and foreign.”

The current path, the framework says, is untenable. It sets out an agenda for the consolidation of state authority and the prevention of outside support to armed groups. It also contains a pledge by the DRC to respect “the legitimate concerns and interests” of neighbouring countries, an implicit reference to Rwanda’s long-held security concerns about the operation of anti-government Hutu militants based in eastern Congo.

Mr. Ban raised the issue of the intervention brigade in the Security Council shortly after his return from Ethiopia last March. He told Security Council members that the envisaged brigade would operate under the command of the UN mission in the DRC, MONUSCO, and would cost $140 million (in addition to the $1.4 billion it costs MONUSCO to maintain 19,815 troops annually). On 27 December, Mr. Ban also wrote to the Security Council requesting approval for the use of unmanned aerial vehicles, commonly known as drones, by MONUSCO for “advanced information collation, analysis and dissemination to enhance situational awareness and to permit timely decision-making.”

Last January, the Security Council approved the request to use UAVs in the Congo “without prejudice to the ongoing consideration by relevant United Nations bodies of legal, financial and technical implications of the use of unmanned aerial systems.”

The trigger for these measures was the brutal occupation of Goma, the capital of North Kivu province in eastern DRC, by the M23 in November of last year. The event was a serious setback to both the Congolese and the UN.

Two days after the fall of Goma, the government suspended its commander of ground forces, Gen. Gabriel Amisi Kumba, who had been accused several times of atrocities by human rights groups—in addition to being accused by the UN Panel of Experts a few months before of selling weapons and ammunitions to illegal armed groups.

The occupation of Goma underlined two perennial problems: the weakness of the DRC to exist as a nation and the readiness of armed rebel groups to exploit this weakness.

The brigade, consisting of 3,069 troops, is led by a Tanzanian general, and is organised into three infantry battalions, one artillery unit, one Special Forces unit and a reconnaissance company. Crack troops from Tanzania, South Africa and Malawi have already been contributed to it, and its mission is to “prevent the expansion of all armed groups, neutralize these groups, and disarm them.”

The UN appears determined to emphasize the “exceptional basis” for approving the intervention brigade, averring in the resolution that it is not creating “a precedent or any prejudice to the agreed principles of peacekeeping.” The resolution also calls for a “clear exit strategy” for the brigade.

As if on cue, a day after the resolution was adopted, M23’s founder, Gen. Bosco Ntaganda, surrendered in the Rwandan capital, Kigali, and was handed over to the International Criminal Court (ICC). The M23 had suffered a violent split at the end of February, leading to serious fighting between the main faction, led by Sultani Makenga, and a smaller faction led by Ntaganda. The M23 had announced a unilateral ceasefire on 7 January, but few took this seriously given the group’s opportunistic character and its lack of a unified front.

Will the drones and the intervention brigade change the chaotic, bloodstained trajectory of the Congo? Its forces, from countries with uneven capacities, will have to choose their targets very carefully to be effective, some observers advise. But a potential target—M23—has already asserted itself.

In April, the M23 wrote an open letter describing Tanzania’s decision to participate in the intervention brigade as a “dangerous adventure.” The letter, signed by Bertrand Bisimwa, the political leader of M23, called on Tanzania to pull out of the brigade. Bisimwa wrote a similar letter to South Africa, which is contributing over 1,000 well-equipped troops to the intervention brigade. Both South Africa and Tanzania dismissed the threats. Tanzanian foreign minister Bernard Membe told his country’s parliament, in response to M23, that “we are not going to Congo as lords of war, we are going there as advocates of peace to help our neighbours.”

The M23 is said to have about 2,000 armed fighters, but its real strength in the past came from the support it allegedly got from Rwanda, a charge Rwanda has strongly denied. Rwanda is a signatory to the framework signed in February; on signing it, Rwandan President Paul Kagame noted that “nothing would be of greater benefit to Rwanda than real progress toward regional peace and stability.” Rwanda is also currently an elected member of the Security Council, and it played an important role in the Council’s adoption of Resolution 2098.

Analysts believe M23 could find itself isolated; without serious internal support in the Congo, and harassed as it already is by other Congolese militia groups like Raia Mutomboki, it could be defeated by the intervention brigade and the Congolese forces.

The mission is not an easy one, however. As Helmoed Romer Heitman, a South African military analyst, told Reuters, “It’s a complex mission. From a tactical point of view this is a logistical nightmare because you don’t know who’s who in the zoo from one day to the next.”

Mr. Heitman was referring to the proliferation of competing militia factions in eastern Congo. Taking count of the array of militia groups is a favourite parlour game among diplomats and foreign journalists in Kinshasa. Among the most notorious, you will hear, are the Raia Mutomboki or Angry Citizens Alliance, a multiethnic coalition that appears to control a huge chunk of territory, and to sordid effect (the UN recently accused it of massacring at least 243 women and children in North Kivu); the Nyatura, a Hutu group that has perpetrated massacres of civilians; and a small group called the Union of Congolese Patriots.

Farther away, the Enyele rebels in Equateur are engaged in a decades-old conflict over fishing rights; there is the Mayi Mayi, a localized group with the limited aim of resisting allegedly Rwandan-backed forces in the Congo; and Uganda’s Lord’s Resistance Army (LRA) rebels, still active in parts of the Congo, are doing their signature best, killing, raping and abducting children. Indeed, the country’s meltdown has at various times drawn Rwanda, Uganda, Angola, Zimbabwe, Sudan, Central Africa Republic and Chad into prolonged warfare.

The M23, however, has gotten all the media attention recently. It was started by Ntaganda and other defectors from the Congolese army. Wanted by the International Criminal Court on charges of war crimes, Ntaganda started cooperating with the Congolese authorities. But the marriage did not last: Ntaganda and others set up M23 less than two years later, claiming that the 23 March 2009 (hence M23) agreement between the government and the Congrès National pour le Défense du Peuple (CNDP), another armed militia, was not being honoured.

It is hard to discern any moment, in a conflict so long and chaotic, with so many false hopes and subsequent disasters, that one can hope may be a turning point. Only a few months ago, hardly anyone in Kinshasa would have had any hope of an end to the long nightmare. Journalists and aid agencies working in conflict situations tend to exaggerate civilian casualties, but the figures bandied about for the Congo’s wars—two to three million fatalities—seem rather an underestimate given the scale of the tragedy.

No one, however, doubts that taking M23 out of the equation will bring great clarity to the situation in the Congo. Or that it will surely indicate that the vast unhappy country may be taking a turn for the better. This is why analysts hope that it will be the intervention brigade’s first target.