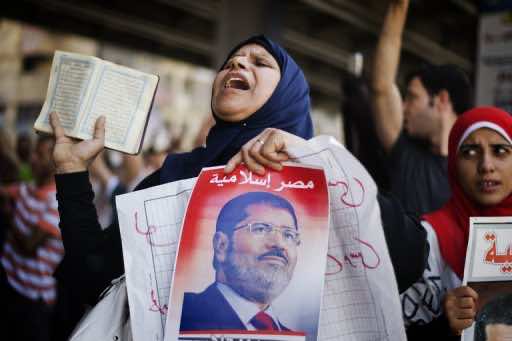 Only a few thousand supporters of Egypt’s ousted president Mohamed Morsi turned out for protests Friday despite calls for massive marches, as Islamists reeled from a fierce police crackdown.

Friday was set to be a test of the remaining strength and commitment of the Islamists, who called for “Friday of martyrs” protests after the main weekly Muslim prayers.

But Morsi’s Muslim Brotherhood managed only to rally several thousand supporters, unlike the hundreds of thousands who flooded streets before police and soldiers dispersed two protest camps in Cairo earlier this month, killing hundreds.

Their numbers have been thinned by a fierce crackdown that has seen some 2,000 members and leaders arrested, including the movement’s supreme leader, Mohamed Badie, earlier this week.

On Friday about 2,000 Islamists rallied in the middle class Muhandesseen neighbourhood, avoiding a military cordon around a public square, while 5,000 rallied in the upscale Maadi suburb.

“The interior ministry are thugs,” the protesters chanted.

In the Nile Delta city of Tanta, police fired tear gas to disperse protesters after they clashed with civilian opponents, and arrested 15 Islamists, security officials said.

At the Isteqama mosque in Giza on the outskirts of Cairo, dozens of protesters gathered for a march, many carrying pictures of Morsi.

“The Mubarak era is back, worse and stronger,” he added.

The call for demonstrations by Morsi loyalists came as Mubarak was released Thursday from jail to house arrest at a military hospital.

The release stirred little interest in Egypt, which has been rocked by political unrest since Morsi’s ouster in a July 3 military coup after massive protests against him.

Nearly 1,000 people were killed in a week of violence between Morsi loyalists and security forces after police dispersed their protest camps on August 14, sparking international concern and condemnation.

Many Brotherhood members are in hiding, avoiding their homes and even communication by telephone, a mid-level member of the group told AFP on condition of anonymity.

“We no longer receive directives and we don’t really know what we should do anymore. Most of our direct leaders are detained,” the member from the Nile Delta said.

Brotherhood supreme guide Badie was arrested Tuesday, the first such detention of since 1981 of the head of the movement.

His continued detention even as Mubarak is released has stirred comment, particularly as Mubarak also faces charges of complicity in the deaths of protesters.

Mubarak’s next court session is due on Sunday, when Badie and several other Brotherhood leaders will also appear before a judge.

On Thursday, Washington sidestepped questions about Mubarak’s release, but called for Morsi to be freed.

“Our position on Mr Morsi remains the same. We believe there should be a process for his release,” State Department Jen Psaki said.

The United States has cancelled joint military exercises with Egypt but stopped short of halting its $1.3 billion a year in mainly military aid.

Meanwhile, there has been no sign of that a crackdown against the Brotherhood will slow.

The latest arrest was that of Ahmed Aref, one of the few remaining spokesmen for the group.

At the same time, there have been attacks against Christian institutions, which have been blamed on Islamists.

Dozens of Christian churches, schools, businesses and homes — mostly in the rural south — have been attacked, allegedly by Islamists angry at the Coptic Church leadership’s endorsement of Morsi’s ouster.

On Thursday, Human Rights Watch condemned the government for failing to protect churches, and the Brotherhood for failing to halt incitement against Christians.

Violence has also continued to target police and soldiers, including three who were killed in a drive-by shooting near the Suez Canal town of Ismailia on Thursday.

The unrest has prompted international criticism of the authorities, with EU foreign ministers deciding on Wednesday to suspend the sale of arms and security equipment to Cairo.

But the ministers expressed concern over the economic situation and said “assistance in the socioeconomic sector and to civil society will continue”.