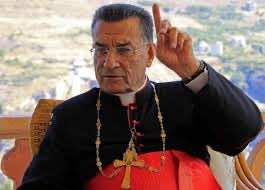 Maronite patriarch Bechara Boutros Rai, who is known for his strong views against radical Islamism, said the situation in Egypt and Syria showed there was a plan by outside powers “to destroy the Arab world”.

“There is a plan to destroy the Arab world for political and economic interests and boost inter-confessional conflict between Sunnis and Shiites,” the Lebanese Christian leader told Vatican radio.

“Some Western and Eastern powers are fomenting all of these conflicts. We are seeing the total destruction of what Christians managed to build in 1,400 years” in terms of peaceful cohabitation with Muslims, he said.

The patriarch, whose church is in full communion with the Vatican, said Christians were “paying the price” of outside interference in both Egypt and Syria.

In Egypt, he said a Western power which he did not name had “helped the Muslim Brotherhood gain power with huge sums in billions of dollars”.

He also accused the international community of “total silence” over Iraq, where he said 1.5 million Christians had fled in the wake of Saddam Hussein’s fall.

During a visit to France in 2011, the Maronite patriarch had defended Syrian President Bashar al-Assad and he has been critical of states supplying arms both to the al-Assad’s regime and the rebels.

Lebanon is becoming more and more caught up in the conflict in neighbouring Syria.

On Friday, 42 people were killed and hundreds wounded by two car bombs aimed at Sunni mosques in the city of Tripoli in northern Lebanon.