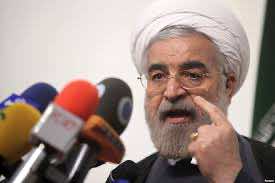 “The situation prevailing in Syria today and the death of a certan number of innocent people caused by chemical weapons is very distressing,” said Rowhani, adding that Iran, itself a victim of chemical attacks in its 1980-1988 war with Iraq, “totally and vigorously condemned the use of chemical weapons”.