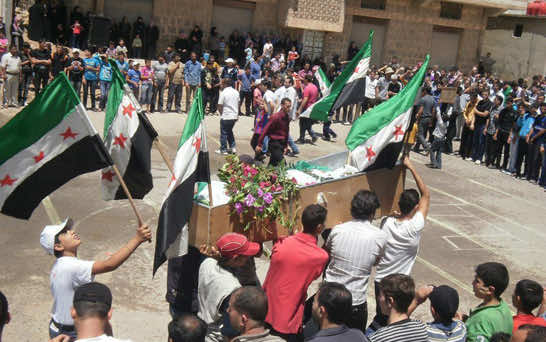 78 civilians died due to the operations led by Assad forces throughout Syria.

The forces organized the operations via heavy weapons having also killed civilians, including women and children.

The operations, both led on land and in air, killed 22 in Syrian capital Damascus, 17 in Idlib, 15 in Aleppo, 12 in Daraa, 6 in Homs, 2 in al- Qunaytirah and 1 in Deir ez-Zor, including 8 women and 8 children, Syrian Network for Human Rights (SNHR) said.

Meanwhile, forces related to Free Syrian Army (FSA) made a warplane crash, which was trying to bomb the East Ghouta region of Damascus, Syrian Local Coordination Committee (LCC) claimed and added the opposition group shared the video of the warplane in internet.

The city was fired with rockets from the Mezzeh Military Airport, where FSA units annihilated 6 tanks in Ghouta, which belong to the regime forces, LCC added.

On the other hand, SANA, Syrian national news agency announced that security forces made several armed groups ineffective and seized their weapons, annihilating also their vehicles.