Morocco World News
Home Middle-East Egypt Turkey PM fires back at US over his claims on Israel, Egypt 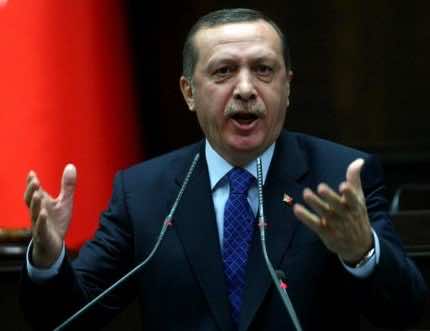 Turkish Prime Minister Recep Tayyip Erdogan on Saturday criticized Washington for its response to his claims of Israel’s involvement in the Egypt crisis.

The Turkish leader on Tuesday accused the Jewish state of being behind the military-backed ouster of Islamist president Mohammed Morsi last month.

Erdogan’s accusation was furiously rejected by the White House describing it as “offensive and unsubstantiated and wrong.”

“Why is the White House making a statement on this? The White House should not have spoken about this. If there’s somebody to speak on this, it should have been Israel,” Erdogan said in televised remarks Saturday.

He also said that the White House’s statement “upset” him, calling Washington’s approach to its NATO ally was “unbecoming.”

But he added: “This is very important to show the world’s double standards,” without elaborating.

Earlier this week Erdogan, speaking to a meeting of his Islamic-rooted Justice and Development Party (AKP), said, “What do they say about Egypt: democracy is not the ballot box. Who is behind this? It’s Israel.”

“We have the evidence,” he added, citing what he said were comments by an Israeli justice minister to a 2011 forum in France in which he allegedly said Morsi’s Muslim Brotherhood would not be able to remain in power even if it won elections.

Morsi was sworn in as Egypt’s first democratically elected leader in June 2012 but was overthrown by the military last month with popular backing.

Erdogan’s AKP government, which had developed friendly ties with Morsi and the Muslim Brotherhood, has described his ousting as a “coup”.

Erdogan’s comments about Israel have also infuriated Egypt’s new rulers who said the Turkish leader’s latest words “have no basis in fact and are not accepted by any sane or fair person”.

And in Israel, an official in Israeli Prime Minister Benjamin Netanyahu’s office told Agence France Presse Tuesday: “These comments by the Turkish prime minister are nonsense.”