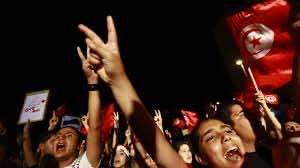 Thousands of protesters marched in Tunis Saturday, on the first day of a planned week-long campaign aimed at bringing down the Islamist-led government, amid political deadlock in the north country.

They headed in the direction of the national assembly, where activists and opposition MPs have gathered regularly since the July 25 assassination of secular politician Mohamed Brahmi, demanding the departure of the government led by the Islamist party Ennahda.

“The people want the fall of the regime,” “Get out!” and “(Ennahda leader Rached) Ghannouchi assassin,” were some of the slogans chanted by the protesters.

More than an hour after the start of the protest the numbers continued to grow.

The opposition National Salvation Front (NSF) is hoping the demonstration will trigger a week of protests across the country that will force Ennahda’s resignation and lead to the formation of a non-partisan administration.

Saturday’s protest comes amid political turmoil in nearby Egypt, where the army overthrew Islamist president Mohamed Morsi last month after millions of protesters took to the streets demanding that he step down.

It also follows efforts by Tunisia’s powerful UGTT trade union to mediate between the opposition and the ruling Islamists and find a way out of the crisis.

The talks have made little progress since they began at the start of the month, with the NSF insisting on Friday that any negotiations prior to the government’s resignation were a “waste of time.”

The opposition accuses Ennahda of failing to rein in Tunisia’s hardline Islamist movement, which is blamed for murdering Brahmi and Chokri Belaid, another prominent secular politician whose assassination in February brought down the first Ennahda-led coalition.