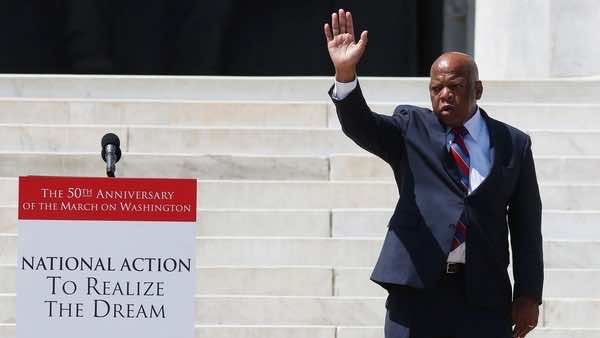 Tens of thousands gathered Saturday to mark 50 years since the March on Washington, the civil rights watershed where Martin Luther King Jr famously declared: “I have a dream.”

Under blue skies, the predominantly — but by no means exclusively — African American crowd swelled around the Reflecting Pool, cheering a procession of speakers who addressed them from the white marble steps of the Lincoln Memorial.

“This is not a time for nostalgic commemoration… The task is not done. The journey is not complete. We can and we must do more,” said King’s son Martin Luther King III, speaking from the precise spot where his father delivered one of American history’s greatest speeches.

“Fifty years ago, my father stood upon this hallowed spot and the spirit of God spoke through him… I can almost hear my father humming, ‘A train’s a-coming,'” he said.

“Their march is now our march, and it must go on,” echoed Attorney General Eric Holder, honoring the estimated 250,000 who assembled on the National Mall in sweltering heat on August 28, 1963 to denounce racial segregation and demand equal rights.

“Today, we look to the work that remains unfinished,” Holder said. “We want this nation to be all it was designed to be, and all it can be.”

Organizers had planned for as many as 150,000 people to attend Saturday’s mass rally and afternoon march past the nearby Martin Luther King Jr monument, ahead of another commemorative march Wednesday to be addressed by President Barack Obama.

The March on Washington is best remembered for King’s stirring vision of a United States free of inequality and prejudice, telecast live to a nation undergoing a phenomenal decade of soul-searching, crisis and change.

Foremost on many minds was Trayvon Martin, the unarmed black Florida teenager shot by a neighborhood watch volunteer who was subsequently acquitted of murder, in a test of the state’s “stand-your-ground” self-defense law.

Speakers and demonstrators alike also voiced concern for the Voting Rights Act, a key piece of civil rights legislation that the US Supreme Court has sent back to Congress to revise.

“We have another fight. We must stand up and fight the good fight,” Congressman John Lewis of Georgia, who addressed the March on Washington as a 23-year-old activist a half-century earlier, told the rally.

“We cannot go back. We have come too far… We can not give in.”

In the front rows, the largely middle-aged and good-humored crowd held up signs condemning racial profiling and demanding statehood for the US capital’s District of Columbia, which has no voting member of Congress.

“We have not progressed. We’re going backwards, I’d say, in the last 20 years,” said Vera Peele of South Bend, Indiana, who expressed concern about the ability of the frail senior citizens she helps look after to access voting stations.

“We’re getting away from what really matters, and that’s the people,” added mother-of-six Tameka Johnson of Scotland Neck, North Carolina, a teaching assistant worried about the impact of educational cutbacks in her Southern state.

Marjorie Ross of Springfield, Massachusetts, was part of a group that traveled overnight for seven hours to find itself unexpectedly at the very front of the crowd that stretched back to the Washington Monument with the Capitol in the distance.

“My grandmother came in 1963. I picked up the torch to be here for her,” said Ross, who was 13 back then. “As a kid I endured a lot of injustice, and I’m sure it was because of the color of my skin.”