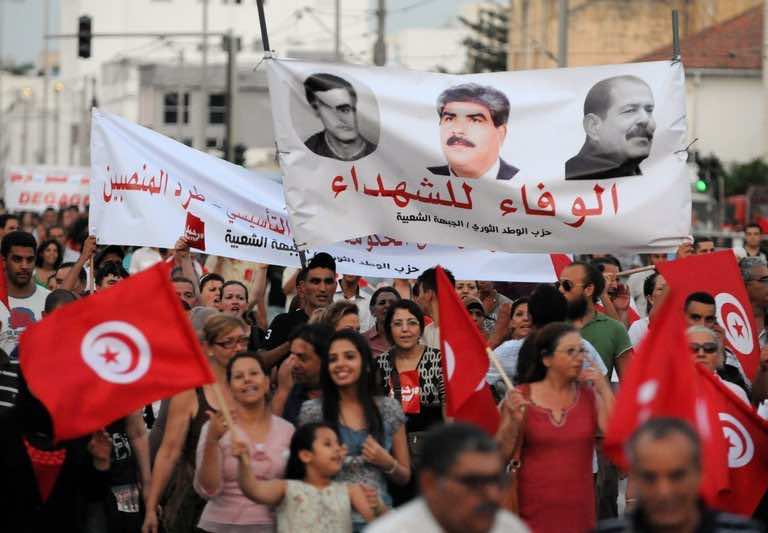 Thousands of protesters gathered outside Tunisia’s national assembly Saturday demanding the ouster of the Islamist-led government, amid political deadlock a month after the assassination of an opposition MP.

“The people want the fall of the regime,” “Get out!” and “(Rached) Ghannouchi assassin,” were some of the slogans chanted by the protesters, the latter referring to the ruling Islamist party Ennahda’s veteran leader.

The organisers, who say the protest marks the first day of a week-long campaign to bring down the government, dubbed the “week of departure,” claimed 60,000 people attended, while the police gave an estimate of 10,000.

The protest took place in a celebratory atmosphere, with demonstrators draped in the Tunisian flag and singing the national anthem, while opposition MPs addressed the crowd.

“We must bring down the government of shame… because of which there are only political assassinations, terrorism and the harassment of political activists, the impoverishment of the people,” said Mongi Rahoui.

“Soon we will go to the Kasbah and surround it,” he added, referring to the location of the government’s headquarters.

An evening concert is planned by artists backing calls for the dissolution of the cabinet.

Saturday’s gathering comes one month after secular politician Mohamed Brahmi was assassinated, the second attack of its kind in six months, which plunged Tunisia into crisis.

The opposition National Salvation Front (NSF), which organised the protest, has repeatedly insisted on the resignation of the Islamist-led government step down and the formation of a non-partisan administration.

The demonstration coincides with political turmoil in nearby Egypt, where the army overthrew Islamist president Mohamed Morsi last month after millions of protesters took to the streets demanding he step down.

Tens of thousands of Tunisians have turned out for similar anti-government demonstrations twice already this month.

Tunisia’s powerful UGTT trade union has been mediating between the opposition group and the Islamists to try and find a way out of the crisis.

But the talks have made little progress, with the NSF insisting on Friday that any negotiations prior to the government’s resignation were a “waste of time.”

Ennahda indicated on Thursday, for the first time since the start of the crisis, that it might agree to step down, having previously rejected the opposition’s demands.

But the Islamists, who won the largest numbers votes in October 2011 elections, stressed that a “national dialogue” bringing together supporters and opponents of the ruling coalition needed to take place first.

“For Ennahda, a government of technocrats will destabilise the state. For the opposition, the state has been destabilised enough already,” Tunisian daily Le Temps said in an editorial on Saturday, entitled: “Political stalemate, institutional deadlock.”

The UGTT has not given up hope of forging a compromise between the rival factions.

“We hope that we will find a solution responding to the interests of the nation above all, and which satisfies the different parties,” said union’s secretary general Hocine Abassi, after holding talks with President Moncef Marzouki.

The opposition accuses Ennahda of failing to rein in Tunisia’s hardline Salafist movement, who are blamed for murdering Brahmi and Chokri Belaid, another prominent secular politician whose assassination in February brought down the first Islamist-led coalition.

Ennahda has also been accused of mismanaging the economy and failing to improve living standards, with Egypt’s Mohamed Morsi facing similar criticism in the mass protests that led to his military overthrow on July 3.

Senior Ennahda members have, for their part, accused the opposition of trying to mirror events in Egypt, saying their demands amount to an attempt to engineer a “coup” like the one that toppled Morsi.