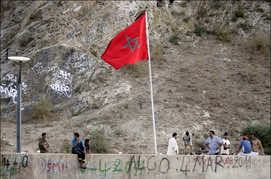 In towns along the closed border between Morocco and Algeria, the smuggling of fuel, goods and people is often a family business.

Yet despite its implications for both countries’ security, illegal trade is proving a tough problem to fix.

“Fighting smuggling with the available means in each country, in the absence of a joint regional policy, has become almost impossible,” says Oujda activist Hassan Ammari.

A quarter of Algerian fuel ends up in smugglers hands for sale across the border. The proceeds help fund networks of drug traffickers and terrorists, Algerian Interior Minister Daho Ould Kablia said last month, explaining his plan to slow the bleeding by rationing the supply.

The move proved catastrophic for the kingdom’s border zone. Transportation prices skyrocketed, while Moroccan villages that rely on cheap Algerian fuel to run their generators and water pumps found themselves in the dark.

“The interruption of fuel trafficking from Algeria to Morocco led to serious discontent, stress and social tension,” Ammari says.

“Everyone here uses smuggled fuel, with the exception of some government departments. This has led to the bankruptcy and closure of most petrol stations in the cities of the region,” the activist adds.

Smuggling is the main source of income for some border villages, a recent study from the Oujda Chamber of Commerce found. In Bani Drar, about 20 kilometres from Oujda, trucks from various Moroccan cities queue up every day to buy cheap Algerian fuel.

Petrol is not the only thing travelling across the border. Also in high demand are prepared food products and medicine from Algeria, and fresh fruit, vegetables, clothing and shoes from Morocco.

Buyers and sellers from both sides of the border were not about to let an impassable route slow them down.

“What amazed me during the past few weeks is that the rest of the illegal activities across the border have not stopped, despite the Algerian trenches,” Oujda businessman Omar Baccouche tells Magharebia. “Smuggling of cigarettes and food continued. Cross-border movement of persons, which is illegal because this border is officially closed, continued too.”

But according to Driss Sedraoui, a political and human rights activist in Kenitra, the focus needs to shift from the financial impact of trafficking to a far greater threat.

“It is true that contraband goods have swept the market with devastating consequences for the economy, but we should not overlook the fact that the border areas are a refuge for terrorist groups, rebel movements, gangs and international drug dealers. The interests of all of these groups overlap and intertwine,” Sedraoui tells Magharebia.

Money accrued from “smuggling and drugs may be redirected to finance terrorism and armed movements,” the Kenitra activist notes.

“All reports confirm that terrorists in the region, especially al-Qaeda in the Islamic Maghreb, turn to criminal activities, smuggling and drug trafficking, robberies and kidnappings in order to get funds,” Sedraoui says.

He was apprehended after returning from Algeria through channels used by smugglers.

Even though Morocco is concerned that illegal migration networks could smuggle extremists into the national territory, from al-Qaeda, Ansar al-Sharia, Boko Haram in Nigeria, al-Shabab in Somalia and other groups, the problem persists.

According to Moroccan Centre for Strategic Studies (CMES) chief Mohammed Benhammou, the problem is “thousands of families [that] live from trade and activities related to smuggling from Algeria, like transport, storage and distribution”.

“We must not lose sight of the smuggling barons who piled up fortunes and have consolidated considerable influence,” he says, noting that they could use the money “for politics, through buying votes and directing election results”.

“All of this is without a doubt a major threat to the country’s political future, and threatens to make the fate of democracy and development dependent on outlaws,” Benhammou adds.

The head of the Nador-based Grand Rif Association for Human Rights, Said Chramti, agrees with the CMES head, noting that “the tonnes of fuel and goods would not have been smuggled through the Moroccan-Algerian border, were it not for the complicity of some corrupt elements of the army and border guards, who have collected great wealth as a result”.

From the trafficking of drugs and fuel to the threat of terrorist infiltration, the decades-old border problem is raising calls for greater co-operation between Morocco and Algeria.

Hassan Mriji, Secretary-General of the Nador-based Mediterranean Union of Transport and Professions, said that anti-smuggling measures must fall within the framework of a comprehensive policy based on consultation between the two neighbours.

“The governments of Morocco and Algeria must combine anti-smuggling efforts with measures intended to mitigate the impact on the population,” he tells Magharebia.

New development projects in the region, he suggests, could “provide a substitute for unemployed young people and families who rely on smuggling as a primary source of making a living”.