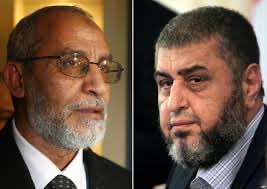 The trial of Egyptian Muslim Brotherhood chief Mohamed Badie and his two deputies on charges of inciting the murder of protesters was adjourned minutes after it opened Sunday because the defendants were absent.

The court adjourned the trial of the Brotherhood leaders and 32 other Islamist defendants to October 29, so the defendants could be brought to court.

They had not appeared in court on Sunday for security reasons, security officials said.

The hearing was the first in the proceedings against the top Brotherhood leaders, who were detained in a sweep against Islamists after the July 3 ouster of president Mohamed Morsi.