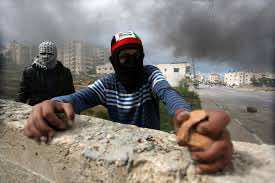 They said Rubeen Abed Fares, 30, and Yunis Jahjouh, 22, were both shot in the chest and Jihad Aslan, 20, died of brain damage.

The hospital officials said all the casualties had been hit by live ammunition.

An Israeli police spokeswoman said that border police used “riot dispersal means” to disperse a stone-throwing crowd of 1,500 people, but she could not immediately confirm any fatalities or the use of live fire.

“In the early hours of the morning a border police team went into Qalandiya camp to arrest a hostile terrorist activist,” spokeswoman Luba Samri told AFP.

“After his arrest a mob of about 1,500 residents began a disturbance, throwing petrol bombs and stones, endangering the lives of force members, who responded with riot dispersal means,” she said.

“We do not know of any fatalities on the other side,” she added. “We know of three injured who were taken to a (Palestinian) hospital but we do not know of danger to their lives.”

She said that three border policemen were lightly injured by stones.

The bloodshed came as Israeli and Palestinian negotiators were expected to meet for another round of peace talks, formally resumed this month after a hiatus of nearly three years, thanks to an intense bout of shuttle diplomacy by US Secretary of State John Kerry.

Palestinian sources, speaking on condition of anonymity, have said they expect the talks to be held Monday evening in the West Bank town of Jericho, but there has been no official confirmation from other side.

Speaking in Amman on Saturday after talks with chief Palestinian negotiator Saeb Erakat, Jordanian Foreign Minister Nasser Judeh said he expected the next round to take place “a few days from now.”

He called on the US administration to “take serious and quick steps” to prevent the collapse of peace efforts.

The talks have been overshadowed by Israeli plans to build more than 2,000 new homes for Jewish settlers on occupied Palestinian territory.

On Sunday, Jerusalem city council’s finance committee approved a budget of $17.3 million (13 million euros) for infrastructure work at the site of the planned new east Jerusalem settlement of Ramat Shlomo.

The site hit the headlines in March 2010, when Israel sparked the ire of the US administration by announcing, during a visit by Vice President Joe Biden, that 1,600 new homes would be built there.

“The daily killings and ongoing settlement activity are all Israeli messages that aim to destroy the peace process,” Abu Rudeina said.