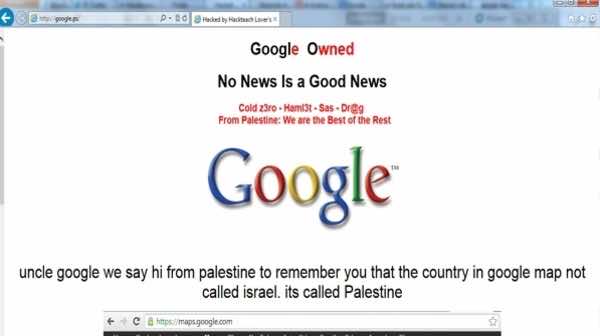 Google’s domain for Palestine http://google.ps/ was hacked and defaced on Monday, with a statement appearing on its page protesting the term “Israel” used in Google maps.

“uncle google we say hi from palestine to remember you that the country in google map not called israel. its called Palestine,” the statement says.

“#Question : what would happens if we changed the country title of Isreal to Palestine in google maps !!! it would be revolution ..So Listen to rihanna and be cool 😛,” the statement added.

The hackers also gave the link to the website of Palestine Anger Network www.hackteach.org.

Ramy Kandil, Google’s Public Relations Executive in the MENA regions, told Al Arabiya in a statement that “there was an issue with the DNS registry in Palestine, as a result, some users going to google.com.ps and a few other web addresses were redirected to a different website. This issue appears to be resolved.”

Google caused a stir in May when it changed the tagline on the homepage of its Palestinian version from “Palestinian Territories” to “Palestine.” The move came following a U.N. decision last year upgrading Palestine’s status to “non-member observer state.”

Google spokesman Nathan Tyler said in a statement to the BBC at the time that internet giant was following the lead of the United Nations, the Internet Corporation for Assigned Names and Numbers and International Organization for Standardization] and other international organizations.

Israel protested the decision saying it could hinder the peace process with the Palestinians.

Israel’s Deputy Foreign Minister Zeev Elkin sent a letter to Google saying that “recognizing the existence of a Palestinian state…is in my opinion not only mistaken but could also negatively impinge on the efforts of my government to bring about direct negotiations between Israel and the Palestinian Authority.”

“I would be grateful were you to reconsider this decision since it entrenches the Palestinians in their view that they can further their political aims through one-sided actions rather than through negotiating and mutual agreement,” Elkin added.

“Most of the traffic that happens now happens in the virtual world and this means putting Palestine on the virtual map as well as on the geographic maps,” Saidam said in statements to the BBC.