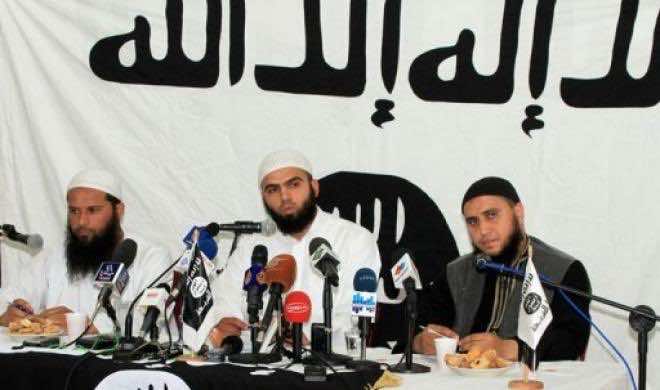 Tunisian Prime Minister Ali Larayedh on Tuesday declared Ansar al-Sharia, one of Tunisia’s leading Salafist groups, a terrorist organization, saying it had been implicated in the assassination of two leftist politicians earlier this year.

Following extensive deliberations between interior, defense and justice ministry officials, Ansar al-Sharia (“Supporters of Sharia”) will henceforth be treated as a terrorist organization “with all that implies on the security, judicial and even media levels,” Larayedh told a news conference.

The prime minister said the group had been found to “have played a role in recent terrorist operations in Tunisia, including against respected figures [Chokri] Belaid and [Mohamed] Brahmi.”

Brahmi’s murder set in motion a political crisis that is still unresolved, with a coalition of leftist and centrist opposition parties demanding the government’s immediate resignation, accusing it of having allowed extremism to flourish.

The government had previously said it believed the two killings had been carried out by a group of extremists.

Premier Larayedh told reporters that Tunisia’s Ansar al-Sharia had been found to have a military wing that is also involved in arms-smuggling, alongside another wing devoted to carrying out non-violent community activities.

He did not suggest a structural link with organizations of the same name in other countries, but said Tunisia’s Ansar al-Sharia was known to have had contacts with Al-Qaeda in the Islamic Maghreb (which emerged in Algeria in the 2000s as a continuation of a previous organization that had taken up arms against the Algerian government).

For Tunis-based analyst Fabio Merone, a researcher at Dublin City University who has closely followed the group’s activities, the decision to outlaw the organization is puzzling.

“Full members of Ansar al-Sharia are relatively few in number, but their community activities have drawn in – I would estimate – 30,000 to 50,000 young people in poorer neighborhoods, involved in preaching, running health centers and other charity work,” he told the Anadolu Agency.

Merone suggested that, rather than declaring all the group’s activities illegal, the authorities could alternatively have moved to isolate the minority of activists said to be engaged in violence.

It is the first time for any Tunisian government since the 2011 revolution to designate any group a terrorist organization.

The moderate-Islamist Ennahda party, which heads a three-party coalition government and which has many members previously imprisoned on terrorism charges, has made it clear that it is unhappy with existing anti-terrorism legislation that it inherited from the authoritarian Zine al-Abidine Ben Ali regime.

In May, New York-based rights organization Human Rights Watch urged Tunisia to reform Ben Ali’s 2003 anti-terrorism law, which it said “uses an overly broad definition of terrorism […] and undermines the right to an effective defense.”

At the Tunisian branch of Amnesty International, former branch secretary-general and veteran rights activist Zouheir Makhlouf said Tuesday that articles of the law that oblige defense lawyers to provide authorities with all the information they have about suspects effectively left them acting as witnesses rather than lawyers.

The law also allows prosecutors to rely on anonymous witnesses, he said, which can easily be used to bring false charges against defendants.

Earlier this year, Larayedh said the law needed to be amended, but that this would unfortunately have to wait until after parliamentary elections.

At today’s news conference, he signaled that judges might in the meantime refrain from applying the more problematic parts of the legislation.

Tunisia’s Ansar al-Sharia was established in the months following the revolution that ousted Ben Ali in January 2011, as Salafist activists were released from prison under a general amnesty.

Its leader is a former political exile, Seifeddine Ben Hassine (also known as Abou Iyadh), who was imprisoned in Tunisia in the closing years of the Ben Ali regime.

After his release, he was freely available for media interviews through 2011 and most of 2012, when he told journalists that Ansar al-Sharia was focused — for the time being — on “daawa” (preaching) as a necessary first stage before the establishment of a “true Islamist state”.

He claimed that democracy was a concept alien to the Muslim world, and that Ansar al-Sharia did not plan to engage in parliamentary politics, in which some Tunisian Salafist groups have since taken part.

At the group’s first congress, held in a Tunis suburb in 2011, he was photographed sharing a platform with Sadok Chorou, a senior figure of the more conservative wing of Ennahda who spent many years as a political prisoner under Ben Ali.

After authorities indicated in September 2012 that they wanted to detain Ben Hassine in connection with offences committed during a demonstration near the US embassy in Tunis, which resulted in the death of four protesters and extensive damage to embassy property, he effectively went into hiding.

Spokesperson for the organization have continued to meet with and give statements to the press.