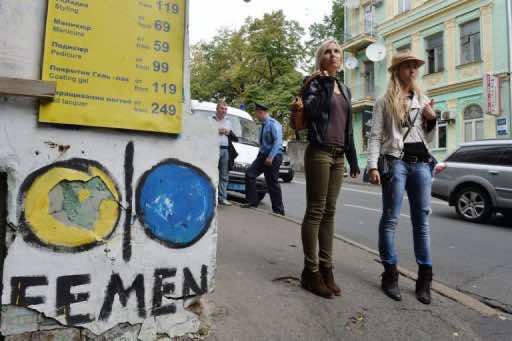 Ukrainian feminist movement Femen said Wednesday it was moving out of its Kiev offices, alleging official wiretapping, a day after police said they discovered a cache of illegal weapons in a raid of its premises.

The group, known for its topless political protests, is facing a criminal probe for possession of illegal weapons after police searched its offices in central Kiev on Tuesday, but said its decision to move out was made earlier over alleged bugging.

The group is moving “for security reasons, since it is impossible to work there now: everything is being listened to,” the head of the Ukrainian branch of the movement, Anna Hutsol, told AFP.

Police said they confiscated a TT handgun and a grenade from the group’s offices, while Hutsol insisted that the group did not have any weapons and suggested they could have been planted in the office while activists were away.

Kiev police spokesman Igor Mikhalko told AFP on Wednesday that the police had launched a criminal probe into illegal possession of weapons by the group, which could lead to a jail sentence of five years.

No one in the group has been charged but the investigation continues and the women could be called in for further questioning, Mikhalko said.

Hutsol told AFP that the group had already decided to move out and that the police raid had “strangely coincided” with its last day in its offices.

Femen’s female activists have become well-known in Ukraine and abroad for baring their breasts to protest discrimination against women and other rights violations.

The group has claimed that Hutsol and other activists were beaten by special services last month in an attempt by the government to pressure them to halt their protests, which target figures including Russian President Vladimir Putin.

The group will continue its activism in Ukraine, Hutsol vowed.

“We are not stopping our activities in Ukraine, we are just moving out of the office.”

“Now to plan and prepare our next protests we will gather in different places.”