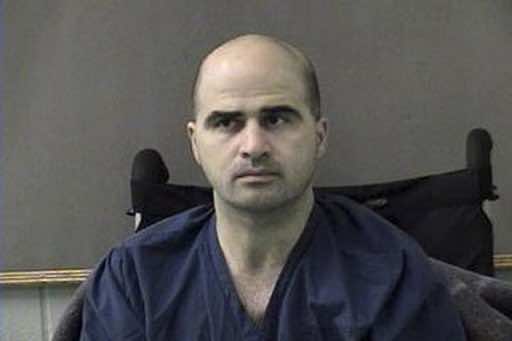 A court martial sentenced a US Army officer to death on Wednesday for carrying out an Al-Qaeda inspired mass shooting on the Fort Hood base that left 13 people dead.

After only four hours of deliberations, the forewoman of a jury of military officers, a colonel, said that it was their unanimous verdict that 42-year-old Major Nidal Hasan should be executed.

“It is my duty as president of this jury to inform you that… the court martial in closed session in a secret ballot of all members concurs to the sentences, to forfeit all pay and allowances, to dismissal from service, to be put to death,” she said.

Hasan, who conducted his own defense during the trial, showed no emotion as the verdict was read.

Under the US military justice system there is an automatic appeal in capital cases, but Hasan has made no attempt to deny the charges and court appointed defense attorneys had expressed concern that he is seeking execution.

The US-born Muslim of Palestinian descent is the first member of the army to receive a death sentence since the 2005 conviction of Hasan Akbar, who killed two in an attack on fellow soldiers in Kuwait in 2003.

On November 5, 2009, Hasan opened fire at a medical processing facility in the sprawling Fort Hood base in Texas that serves as a staging point for soldiers to deploy to combat zones.

Twelve of the dead and 30 of the wounded were soldiers. Hasan was himself shot by a civilian police officer who responded to the attack and he is now partially paralyzed.

The court had heard that Hasan was opposed to the US military’s occupations of Iraq and Afghanistan, and that he had spoken online with an alleged Al-Qaeda figure, radical cleric Anwar al-Awlaki, an American citizen subsequently killed in a US drone strike in Yemen.

Following the sentence, Hasan was rushed quickly out of the military courtroom, which is in Fort Hood, to be transported back to a local civilian jail where he has been held for more than three years.

He is to be taken to military death row in Fort Leavenworth, Kansas, to await execution.

Seven relatives of victims slain in the shooting showed little emotion during the sentencing after repeatedly being warned not to not make any public declarations of support or opposition to the sentence.

After the court was adjourned, several relatives could be seen with tears in their eyes. One, a widow, lightly touched the face of a woman seated next to her.