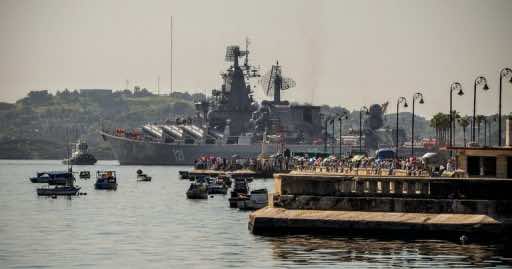 Russia will “over the next few days” be sending an anti-submarine ship and a missile cruiser to the Mediterranean as the West prepares for possible strikes against Syria, the Interfax news agency said on Thursday.

“The well-known situation shaping up in the eastern Mediterranean called for certain corrections to the make-up of the naval forces,” a source in the Russian General Staff told Interfax.

“A large anti-submarine ship of the Northern Fleet will join them (the existing naval forces) over the next few days.

“Later it will be joined by the Moskva, a rocket cruiser of the Black Sea Fleet which is now wrapping up its tasks in the northern Atlantic and will soon begin a Transatlantic voyage towards the Strait of Gibraltar.”

In addition, a rocket cruiser of the Pacific Fleet, the Varyag, will join the Russian naval forces in the Mediterranean this autumn by replacing a large anti-submarine ship.

However, the state-run RIA Novosti news agency cited a high-ranking representative of the naval command who said the changes to the country’s forces in the region were not linked to the current tensions over Syria and called them “a planned rotation.”