Casablanca - In 2013, the Moroccan Center of Pharmacovigilance and Anti-Intoxication (CAPM), which is affiliated to the Ministry of Health, recorded 2,900 scorpion stings from January 2013 to July 6, including 13 deaths. 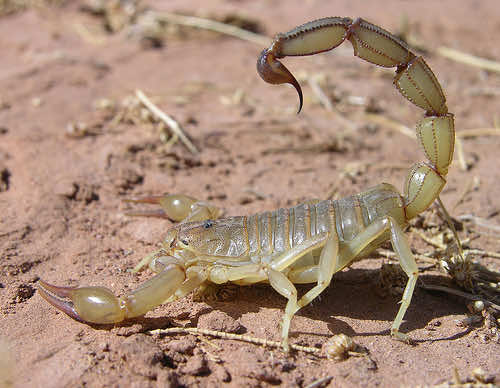 By
youssef sourgo
-
Youssef Sourgo is currently a Master’s student in Linguistic and Literary studies at Ain Chok Faculty of Letters and Humanities.
Aug 29, 2013
Spread the love

Casablanca – In 2013, the Moroccan Center of Pharmacovigilance and Anti-Intoxication (CAPM), which is affiliated to the Ministry of Health, recorded 2,900 scorpion stings from January 2013 to July 6, including 13 deaths.

Based on a previous press release by the Ministry of Health, Mr. El Hossein El Ouardi, Minister of Health, had already given the green light to “the national initiative against intoxication induced by venomous animals and insects last June.”

The initiative was launched in collaboration with the provinces of Marrakech and Rehamna, under the slogan, “a multi-sectoral fight against intoxication caused by scorpion stings and snakebites.”

According to the same source, the Ministry of Health affirmed that after launching the first national initiative against intoxication, the number of deaths caused by scorpion stings and snakebites decreased significantly, shrinking from 400 deaths yearly to only 50 deaths, recorded over the last 5 years.

The Ministry of Health also substantiated all inaccurate data and misinformation about scorpion stings in Morocco, one of which is that the use of serum is still a key medical element in healing scorpion stings.

The Ministry affirmed that Moroccan health centers no longer use anti-intoxication serums simply because they proved ineffective. Medical rehabilitation is the only effective way to save a person stung by a scorpion.

According to the same source, the Ministry also ensured to provide all health centers with materials and facilities necessary for the medical rehabilitation of intoxicated patients, as well as train medical staff on how to deal with such cases.

According to online Jeune Afrique, there are over 50 species of scorpions in Morocco, among which 22 are extremely venomous and dangerous. Marrakech is one of the regions where most scorpion stings are recorded.

The alarming number of scorpion stings and deaths are imputed to the Kingdom’s climatic characteristics, which are scorpion-friendly in most regions, as well as Morocco’s diversity in scorpion species.

Scorpions are very adaptive and enduring arthropods that can live with very little oxygen and feed on a single insect a year. Though they are typically found in deserts and very dry locations, scorpions are also attracted to urban habitats with scorpion-friendly conditions.