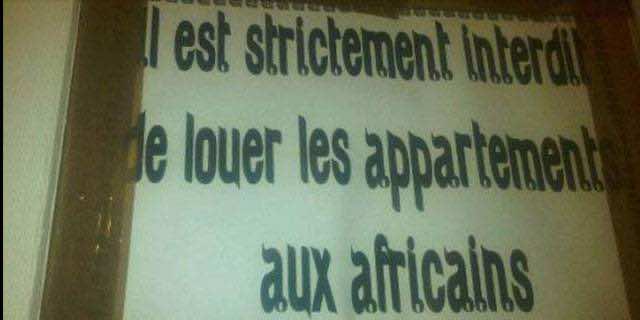 Casablanca- Dear racist Moroccans, yes it’s who I am talking to. You who, disgusted by Black Africans, is yet curiously fascinated by Obama, 2chainz, Lil’ Wayne or Denzel Washington, You, who qualifies blacks as a “dirty race,” “a race that stinks,” you say “they give off a strange, disgusting smell.”

You ask “What are they coming to mess up our country?” “Why are they getting jobs in Morocco when we have so many unemployed people?”

Yes, it’s you I’m talking to, author of these fabricated accusations. Today, August 28 2013, we celebrated the 50th anniversary of the “March on Washington for Jobs and Freedom,” where Martin Luther King Jr gave his legendary “I Have a Dream” speech. Sure, you are not concerned by this celebration, since you obviously don’t care. Since this March was actually made against people like you. Nonetheless I, through this letter, look to modestly make you aware of your wrongs and humbly contribute to you realizing the evil and injustice you create around you.

Dear Moroccan racist, when will you stop idealizing and venerating the blue-eyed foreigner just because they are blond with blue eyes and tormenting the neighboring foreigner, your African brothers and sisters, just because they come from a country that happens to be even more poor and unstable than your own?

Do you not know that the tolerance and “warmth” our country and us Moroccans are so well-known and appreciated for, must be applied on every foreigner, and not only the ones you find interesting. It’s not because a foreigner speaks English and has light colored eyes that they deserve more respect. If Brad Pitt and his Hollywood crowd fascinate you, so be it, there is no harm in that. But know that Africa, hometown of Subsaharians you abuse on a daily basis, offers even more respectable heroes.

Does Thomas Sankara ring any bell? Too bad, there are so many others worth mentioning, not that it would interest you anyway. Didn’t you know, racist ladies and gentlemen of Morocco, that your dear and tender country definitely signed international treaties on welcoming migrants and refugees and outlawing racism, and that it’s often because Morocco doesn’t want to be a welcoming host country that they frequently choose to continue on their journey through the Strait of Gibraltar, which too over and over again leads to death?

Did you know that human rights associations write up reports about these issues on a regular basis. and that they are not held in high-esteem for this very reason?

What about you, the national authorities? If you aren’t raping groups of minors, expelling students, professors, and employees while arresting them and gathering them up like a load of crap without even giving them the time to show you their residency permits, because they don’t have them on them every second of every day just as you wouldn’t walk around with your passport on you every day either.

You round them up to abandon them by the dozens along the borders, without money, clothes, cell phone, absolutely nothing. This makes them the perfect targets for criminals in the surrounding areas. But that, no one talks about that. And you wouldn’t care, anyways.

You, dear Moroccan racist who hates Marine LePen and often complains about Maghreb nationals that are mistreated by the authorities and people of France, when will you not stop seeing beyond the tip of your nose? How is the racism that you make students and employees suffer from on a daily basis different from that which our “cousins” of the suburbs experience in France? And if Arabs living in French suburbs are often mixed up in vandalism and crime, we cannot say that it applies on sub-Saharan migrants in Morocco who, more cultivated and often better educated, are usually more civilized than many Moroccans, and I dare you to contradict me racist!

More important than that, where has your humanity gone? It is 2013, five years after one of the most racist countries in the world learned the error of its ways and elected an African-American president? How does a human being with darker skin automatically imply inferiority to you?

Does skin color sum up equality? Or are you just too indoctrinated and stubborn to see the error of your ways? What makes you act in such a way? When will you change and at what price? And after what? I hope, vainly and naively, dear Moroccan, that you realize the error of your ways soon. Meanwhile, needless to remind you that throughout this letter, the term “dear” was a salutation, because in reality, you are anything but that.

Translated and edited by Anna Jacobs