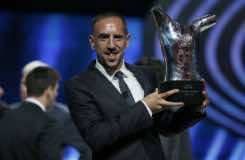 The France international becomes the third player to win the award, the two previous winners being Barcelona duo Lionel Messi (2011) and Andres Iniesta (2012).

Ribery won the award this time around ahead of Messi and Real Madrid’s Portugal striker Cristiano Ronaldo.

The 74-time capped Ribery was an essential cog in Bayern’s charge to last season’s historic treble of the Champions League crown, the Bundesliga title and the German Cup.