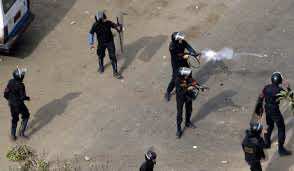 Egyptian police fired tear gas at dozens of Islamist protesters in Cairo who heeded a call for rallies on Friday in support of ousted president Mohamed Morsi.

About 35 protesters had assembled in Cairo’s Sphinx square when police fired tear gas to disperse them, an AFP correspondent said.

The police action was unprovoked, the correspondent said.

Police had warned they would crack down on any protests that “violated the law” and would use deadly force if their stations and government buildings were attacked.

Soldiers had closed off main thoroughfares and squares on Friday in anticipation of the marches.

Security forces have rounded up more than 2,000 Islamists, many from Morsi’s Muslim Brotherhood movement, since they dispersed two protest camps in Cairo on August 14.

More than 1,000 people were killed that day and in ensuing violence, including more than 100 police officers.

The crackdown has severely impacted the Brotherhood’s ability to muster protesters. Only several thousand answered their call for mass rallies on Friday last week.