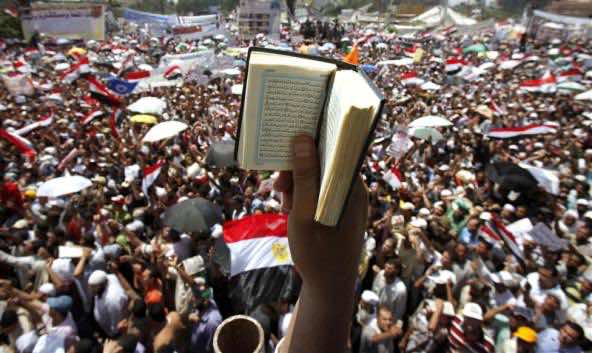 Several thousand Egyptians protested in Cairo Friday in support of ousted president Mohamed Morsi, far fewer than had been hoped for by harried Islamists, who had called for mass rallies.

In the capital’s Nasr City district, thousands marched holding pictures of those killed in days of violent clashes with police this month during a security crackdown on the Islamists.

The Islamists held smaller rallies elsewhere, some descending into clashes with anti-Morsi protesters that left one person dead in the canal city of Port Said, medics said.

Morsi’s Muslim Brotherhood, the main group organising protests, has lost its ability to bring people out in  large numbers because of sweeping arrests that have netted its top leaders among at least 2,000 Islamists since August 14.

That day, police broke up two pro-Morsi protest camps in Cairo. More than 1,000 people died in clashes during that operation and ensuing violence around the country.

“We are not here for the Muslim Brotherhood or Morsi, but for democracy, and for the sake of our wasted votes,” said one protester, Noha Galal, a housewife.

Morsi, Egypt’s first democratically elected president, served for only a year before the military ousted him in the popularly backed coup on July 3.

Police had warned they would crack down on any protests that “violated the law” and would use deadly force if their stations and government buildings were attacked.

Soldiers had closed off main thoroughfares and squares on Friday in anticipation of the marches.

The Brotherhood led Anti-Coup Alliance had called for peaceful rallies and said they would consider proposals to defuse tensions.

“We welcome any calls for calm, but we will continue protesting in a peaceful manner,” Salah Gomaa, an alliance member, told a news conference on Thursday.

In a statement, the Anti-Coup Alliance called for the release of prisoners and demanded a probe into the violence over the past month.

On Thursday, the interior ministry said police arrested Mohamed Beltagi, a firebrand politician, along with Khaled al-Azhari, also an Islamist and a former Morsi cabinet minister.

A former member of parliament, Beltagi became one of the most vociferous opponents of the popularly backed military coup.

Police have already arrested the Brotherhood’s supreme guide Mohamed Badie and much of the senior leadership.

Badie and his deputies are standing trial on charges of involvement in the murder of protesters who stormed the Brotherhood’s headquarters on June30.

This was the second Friday in a row that the Islamists failed to rally huge crowds to their cause.