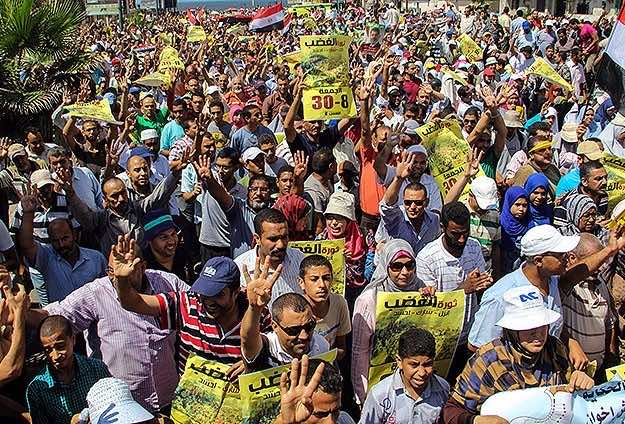 The worst violence took place in the Port Said and Sharqiya provinces.

One person was killed and 59 injured in clashes between supporters and opponents of ousted President Mohamed Morsi in several provinces across Egypt during Friday protests calling for the deposed leader’s reinstatement.

The worst violence took place in the Port Said and Sharqiya provinces.

The Muslim Brotherhood, for its part, the group from which Morsi hails, said that one person had been killed in the clashes – a claim denied by medical and security sources.

A pro-Morsi march also came under attack in the canal city of Ismailia, with several injuries reported.

Minor clashes were also reported in the coastal city of Alexandria and Tanta, capital of the Nile Delta Gharbiya province.

In the Qalioubiya province, dozens of Morsi opponents surrounded a local mosque in the city of Banha to prevent a pro-Morsi march from setting out, prompting clashes between the two sides.

In the Fayoum province south of Cairo, security forces manning a local court complex fired into the air to disperse a pro-Morsi march, eyewitnesses said.

The Friday protests were called by the National Alliance for the Defense of Legitimacy, a coalition of largely Islamist groups led by the Muslim Brotherhood.

The pro-Morsi coalition has also called for a civil disobedience campaign starting Friday, calling the move an “effective measure against the coup leaders aimed at forcing them to reverse the coup and meet revolutionary demands.”

On Thursday, the Interior Ministry threatened to use all means necessary, including live ammunition, against protesters found to be carrying arms or attempting to attack state facilities.

Morsi, Egypt’s first democratically elected president, was ousted by the powerful army on July 3 following mass protests against his administration.