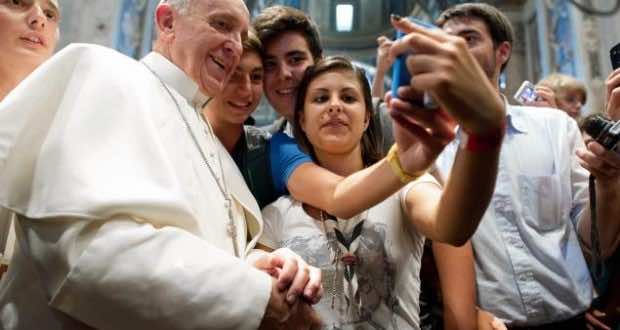 Pope Francis has broken protocol once again, appearing with a puzzled look on his face in a “selfie” photo taken with a group of teenagers visiting the Vatican.

The picture appeared on the Facebook page of one of the youngsters, who used it as his profile picture, and was going viral on social media on Saturday.

The picture comes in the same week that the Oxford English Dictionary included the word “selfie” to denote a self-taken photograph on a smartphone.

The young believers were part of a church group from northern Italy who met with the leader of the world’s 1.2 billion Catholics on Wednesday and were seen going up to him afterwards to take their photo.

“There is no marketing behind these actions. The pope clearly likes being with people while his predecessor liked being with books,” said Beppe Severgnini, columnist for the Corriere della Sera daily.

The 76-year-old pope, Latin America’s first pontiff, has repeatedly broken with Vatican tradition since being elected in March, including regularly picking up the phone and calling ordinary people who write to him.

The photo prompted bemused reactions on Twitter, with one user saying “Now I’ve seen everything” and another quipping: “It’s the end of the world as we know it.”

One unenthused tweeter commented: “Just because Pope Francis poses for a ‘selfie’, doesn’t make it okay!”