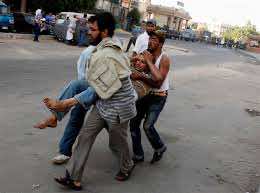 Five civilians died in clashes in Egypt on Friday when opponents and supporters of ousted president Mohamed Morsi clashed in several cities, the health ministry said on Saturday.

Three were killed in clashes in the Giza district in Cairo, one in the canal city of Port Said and one in the Nile Delta province of Sharqiya, the ministry said in a statement.

Thousands of Morsi’s supporters had marched across the country on Friday denouncing the July 3 coup that overthrew the Islamist president.

Separately, the interior ministry said two policemen were killed in militant attacks on Friday in North Sinai, where security forces have been battling a semi-insurgency since Morsi’s overthrow.