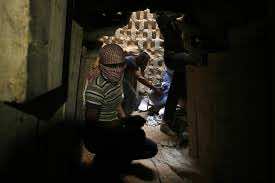 “The foreign ministry strongly condemns and denounces this irresponsible act and demands their release,” it said of the Egyptians it said Hamas arrested on Saturday morning.

Relations between Egypt and the Islamist Hamas movement have sharply deteriorated since the July 3 ouster of president Mohamed Morsi.

The Islamist Morsi is now in detention, accused of colluding with Hamas in staging prison breaks and killing policemen during an early 2011 uprising that overthrew strongman Hosni Mubarak.

The foreign ministry did not specify the number of Egyptians arrested in Gaza, which is under semi-blockade by Israel and Egypt.

In its statement, it expressed it support for Palestinians, but said it would not “forgive” Hamas’s action.