THE HAGUE — The analysis of samples taken by UN inspectors in Syria probing alleged use of chemical weapons could take "up to three weeks," the Organisation for the Prohibition of Chemical Weapons (OPCW) said Saturday. 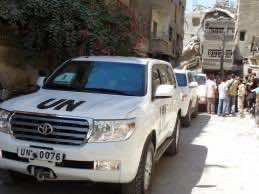 THE HAGUE — The analysis of samples taken by UN inspectors in Syria probing alleged use of chemical weapons could take “up to three weeks,” the Organisation for the Prohibition of Chemical Weapons (OPCW) said Saturday.

“The evidence collected by the team will now undergo laboratory analysis and technical evaluation,” said the group based in The Hague where the team arrived Saturday. “These procedures may take up to three weeks for completion in a systematic, orderly and objective manner.”

A statement added: “Every effort will be made to expedite this process. Their report will be submitted to the United Nations Secretary General by (team leader) Dr (Ake) Sellstrom.”

A German government plane carrying the UN chemical weapons investigators flew in to Rotterdam earlier Saturday before the team was taken by car to The Hague.

The 13 inspectors left Damascus early Saturday and drove over the border to Lebanon after completing their probe into a suspected chemical weapons attack August 21 near the Syrian capital.

They have been investigating allegations of the Syrian regime’s use of chemical weapons against its own people.

US President Barack Obama on Saturday asked Congress to authorise military action against Syria, in a move which lifted the threat of immediate strikes on President Bashar al-Assad’s regime.

Obama said he had decided a chemical weapons attack on a Syrian suburb that killed more than 1,400 people including over 400 children was so heinous that he would respond with a limited US military strike.