By Michael Georgy and Tom PerryCairo, August 1, 2013 (Reuters) Behind sandbags at the Muslim Brotherhood’s protest camp in Cairo, an activist urges supporters to embrace martyrdom. 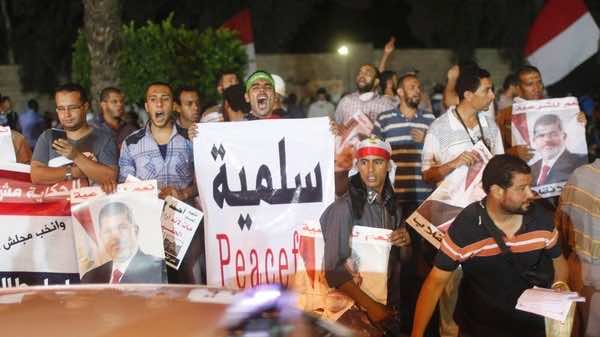 Behind sandbags at the Muslim Brotherhood’s protest camp in Cairo, an activist urges supporters to embrace martyrdom.

It is not a call to arms, but a message that they shouldn’t fear death as they demonstrate against the military’s overthrow of Islamist President Mohammad Mursi.

“Martyrs don’t die. Martyrs go to paradise,” he said through a megaphone as people held aloft symbolic coffins to commemorate more than 100 Mursi supporters already shot dead in the street.

Caught in one of the fiercest crackdowns in its history, the Muslim Brotherhood is using such rhetoric as part of a strategy to survive, mobilizing its followers around a dramatic narrative of good versus evil.

The government signaled on Wednesday it could further turn up the heat, saying Brotherhood protest camps that have sprung up in support of Mursi were a threat to national security that could no longer be tolerated, and referring the group’s three top leaders for trial.

How the Egyptian Brotherhood handles this crisis could shape the fate of Islamists across the Middle East. Spurred on by the army takeover in Egypt, the Islamists’ opponents are stepping up pressure on like-minded groups in Tunisia and Libya.

The Brotherhood’s situation in Egypt appears desperate even as its leaders speak in upbeat terms about victory over the generals, who accuse it of inciting violence and taking up arms.

The Brotherhood, which renounced violence decades ago, says that would be political suicide.

The movement, which operated underground for decades before autocrat Hosni Mubarak was deposed in 2011, would lose the moral high ground it is trying to claim.

The Brotherhood hopes the sit-in at a traffic intersection in northeast Cairo can rob the army-backed government of the semblance of normalcy it needs to get the economy on track –the same tactics used by the opposition against Mursi — but the Brothers’ options are limited.

“They are in a weak position. They don’t have any other cards right now,” said Khalil al-Anani, an expert on the Brotherhood based at Durham University in England.

At the same time, the Brotherhood believes the growing death toll of protesters will make life uncomfortable for the government on the international scene.

Brotherhood leaders have tried to make their case abroad through the international media, even inviting journalists to take guided tours of the protest site with officials who until last month were government ministers.

“There’s no doubt that we are under siege, but we also have them under siege,” Saad el-Hosseini, a senior Brotherhood politician who served as a provincial governor under Mursi.

Like other leaders, he believes the army is in a bind because forcefully ending the protest would inflict mass fatalities on the Brotherhood.

“What happened on Saturday is a very, very severe lesson,” said Hosseini, adding security forces would have to kill 100,000 people to end the sit in. On Saturday, security forces killed over 80 Mursi supporters.

But the grounds for optimism appear limited beyond the Islamist encampment guarded by volunteers armed with sticks and shields with the slogan “martyr in the making,” and wearing headgear ranging from crash helmets to boxing head guards.

The violence since Mursi’s overthrow has fuelled concern in the West of a wider conflagration in Egypt, which straddles the Suez Canal and receives $1.3 billion a year in U.S. military aid to bolster its 1979 peace treaty with Israel.

The popular mood has swung against the Brotherhood after Mursi was accused of trying to establish himself as a new dictator during his first year in office.

His rule was brought to an end by a mass protest on June 30 that encouraged the army to remove him.

Millions took to the streets on July 26 after army chief General Abdel Fattah al-Sisi, now the most powerful man in the country, asked for a popular mandate to fight “violence and terrorism” – a reference to the Brotherhood.

Spurred on by events in Egypt, opponents of like-mindedgroups have taken to the streets of Tunisia and Libya.

Tunisia’s Islamist Ennahda party said on Tuesday it was ready to form a new government — a compromise demanded of Mursi which he was unwilling or unable to make. “Ennahda was freaked out by Egypt, it is definitely a nightmare scenario for them, “said Monica Marks, a Tunisia-based analyst.

For now, the state in Egypt, drawing on a resurgent security apparatus built to suppress Islamists, appears intent on keeping up the pressure on the Brotherhood, which hopes to return to politics under the right conditions.

“This is the toughest phase ever,” said Farid Ismail, a senior Brotherhood politician.

Relatives of Brotherhood leaders detained in the latest crackdown, mostly on charges of inciting violence, complain of rough tactics by the police – a sign of an uncompromising position by the state and potentially worse times to come.

The wife of top Brotherhood man Khairat al-Shater said the police used to knock before arresting her husband during the days of deposed President Hosni Mubarak.

“This time they broke down the door and I found then standing right over me in the bedroom,” said Ezzat Tawfik, fully veiled as she spoke on a Brotherhood television station.

“They filmed my husband as he was getting dressed.”

Such treatment is fuelling anger in the movement.

Although Brotherhood leaders and rank and file say they will only engage in peaceful protests, there are signs the leaders hip is starting to lose its grip.

Brotherhood leaders say they have been unable to rein youth activists when recent protests have turned violent.

Some have expressed fears that the overthrow of Mursi will fuel more radical schools of Islamism. Analysts say that could weaken and eventually split the Brotherhood.

Despite a sense of siege, Brotherhood leaders say they will never resort to violence. The army is too powerful to defeat.

“Using violence would destroy our cause,” said Gamal Heshmat, a Brotherhood official, two of whose sons have been arrested since Mursi was toppled.

The Brotherhood hopes its followers will be content to wait it out at the highly organized sit in, where kitchens staffed by volunteers and equipped with dozens of donated refrigerators churn out tens of thousands of meals a day.

With its top leaders in jail, many question whether the group is capable of recovering. “The signals coming from the regime right now are terrifying,” said Nathan Brown, a professor of political science at George Washington University.

“The Brotherhood is having trouble acting because the architects of its current political strategy are in jail.”