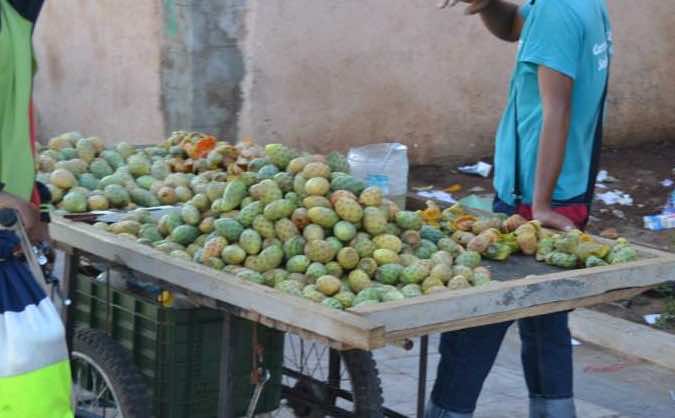 “Come on, come on, cactus fruits, cactus fruits, cactus fruits are cheap today. They are sweet like sugar. I am about to finish, and I just have a few left…. Come on, get cactus fruits before I finish…” : A man, in front of a small cart, is calling people and drawing their attention to buy cactus fruits that are spread smoothly out on his small cart in three different groups that seemed to replicate the classifications of Moroccan society. Each one of the categories is sold for a specific price. This poorly dressed salesman looks thin and weak. He starts taking a small sharp knife and picking off the cactus fruits for some people that surround the small chart…

During the holy month of Ramadan, most of the poor in Morocco buy cactus fruits because they are cheaper in comparison to other fruits like bananas, peaches, figs, avocados and so on; the cactus fruits are seen to be more desirable, especially when the prices of the other fruits are so expensive. Those who do not have the material capability to afford several kilos of these delicious fruits find themselves buying cactus fruits as they are fraught with a lot of fibers that are good for the body. Cactus fruits are also particularly refreshing after a very hot day of fasting.

You can never taste a piece of cactus fruit without stripping it in an extraordinary way. If you are not experienced in peeling this fruit, you may damage it and miss how sweet and cooling it is after a day spend under the unforgiving sun.  Before this, you need to use a handy broom after putting gloves on to remove all of those tiny painful thorns that may be sliding within your skin without being able to see them till you feel the stinging and the itching across your body. You need to cut each piece out in the shape of the symbol of Amazigh cultural identity that is depicted on the flag, an object that is often used to ask for much more space in society as if Arabs do have such a thing in Morocco.

In fact, a segment of Moroccans do experience this job of selling cactus fruits, especially during summer holidays, to earn some money that may be spent directly on them and their family. After a school year, a poor Moroccan student may find himself contemplating how to earn some money. Thus, the idea usually revolves around getting a small cart and some boxes of cactus fruits to sell all day. Moroccans do really love consuming these fruits when they are walking as you may see a man or a woman swallowing twenty or thirty pieces, forcing an abundance of sweet food into their stomach as if they were fighting hunger with grenade like fruits.

Members of the Justice and Development Party (known by its French acronym PJD) were filmed eating “Bissara” or having “Al harsha” in working class areas to bring attention to their allegedly modest and humble character, which was a significant part of their populist appeal early on. They did this after they won a majority of seats in Parliament of course. In the beginning of their term, they would also go to these places without ties; they wanted the media to display how much they were like ordinary people in a democratic country. However, they were never seen or filmed eating cactus fruits because they are afraid that these may cause major problems in digestion.

Politicians are constantly complaining of health problems relating to digestion.  Their concerns for the Moroccan people apparently make them sick with worry.

Instead of fulfilling all the promises that the government has made, the police picked off the unemployed in front of the parliament as if they were the thorns on our beloved cactus fruits.

In short, the grisly and deplorable conditions of so many, in Morocco, may be like that of a piece of cactus fruit. The cactus fruit must be beaten down with a rod to be dug up, like a tree.  It must be put in a box with many others to be kept there before being transported, and all its tiny thorns must be removed for it to be viewed as acceptable. It must be cut with a sharp knife to truly taste and savor its sweetness. Similarly, an unemployed individual must be beaten when he tries to protest, he may be sent to hospital if he is fallen injured, or he goes to jail if he tries to defend himself. All he needs is to bear the beatings, the humiliating -obscene words to be likeable as a good citizen.

Thereby, the police should stop ill-treating and beating Moroccan citizens when they demand their human rights, dignity and welfare. Citizens are not cactus fruits to be so stripped off and cut to be consumed.