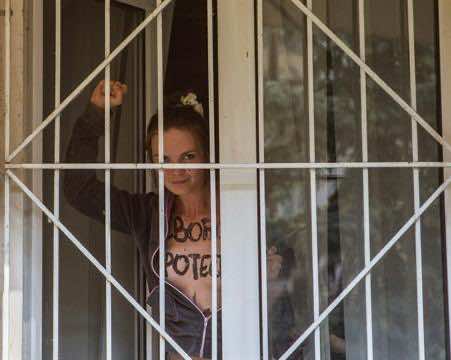 “She will be free within hours. I wasn’t expecting this,” he said, adding that it was a “big surprise.”

The young woman has been detained since May faces trial for painting the word “Femen” on a cemetery wall in protest at a planned meeting of radical Sunni Muslim Salafists.

Another of Sboui’s lawyers, Ghazi Mrabet, said: “This is a relief. It shows that at least part of Tunisia’s judiciary is independent.”

Sboui’s mother expressed her joy at the release, saying: “I will finally have her in my arms. The judiciary has showed that it is independent.”

Amina sparked both scandal and a wave of online support after she was threatened by Tunisia’s increasingly active hardline Islamists for posting topless pictures of herself on Facebook earlier this year.

But the young woman, who accused her relatives of holding her in captivity and beating her, ran away from home in April and had regularly appeared in public before her detention in May, although never topless.

At the end of May, three Femen activists — two French and a German — were arrested after bearing their breasts outside the main Tunis courthouse, in a demonstration of support for Amina.

The arrest of the three women triggered international condemnation and they were released a month later.