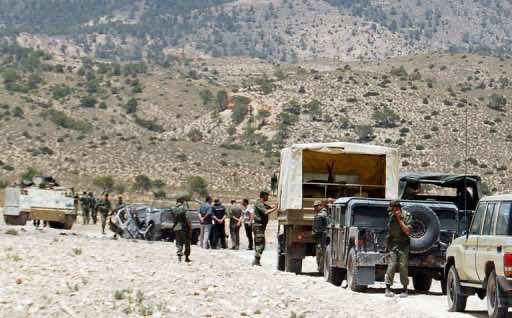 The Tunisian army launched an offensive early Friday against a group of “terrorists” near the Algerian border, where eight Tunisian soldiers were killed earlier this week, a military source told AFP.

“The fighting is in progress, the terrorist group is surrounded,” the source said. “Either they give themselves up or they will be killed.”

The source said the attack took place 16 kilometres (10 miles) from Kasserine, near Mount Chaambi, where the eight Tunisian troops were found Monday with their throats cut after being ambushed by militants.

The attack prompted Algeria’s army to reinforce its presence along the border. Interior Minister Daho Ould Kablia said Thursday such action was taken because of “the troubles that Tunisia is going through.”

Tunisian troops have intensified their hunt for an armed group in the Mount Chaambi area since the spring, after several members of the security forces were killed or wounded by explosive devices.

Algiers has strongly condemned what it called “the base act of terrorism that resulted in several deaths among the Tunisian armed forces.”

Islamist militant groups in Algeria remain active decades after a bloody civil war in the 1990s that killed some 200,000 people, leading some in Tunisia to suggest connections with the group in Mount Chaambi.

Algeria’s foreign ministry condemned on Thursday what it said were “false allegations” against Algeria from “certain circles in Tunisia.”

In a statement published by APS news agency, ministry spokesman Amar Belani decried the allegations as a move to “deceive the Tunisian people as they are mobilising to unite against terrorism.”

Kablia said there had been an “exchange of security information between Algeria and its neighbours to fight the various scourges that threaten the security and stability of the region.”

Visitor exchanges among senior officials from Tunisia, Libya and Algeria have led to closer cross-border cooperation in the region.

Supporters and critics of the government continue to hold street protests every night after breaking the Ramadan fast.