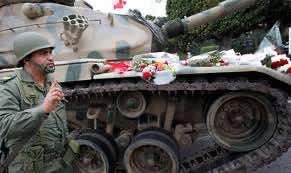 Tunisia’s army launched an offensive on Friday against “terrorists” near the border with Algeria, a military source said, as political leaders in Tunis battled a crisis sparked by an assassination.

The fighting in the border zone where eight Tunisian soldiers were slain earlier this week “is in progress, the terrorist group is surrounded,” the source told AFP.

“Either they give themselves up or they will be killed.”

He said the attack took place 16 kilometres (10 miles) from Kasserine, near Mount Chaambi, where the soldiers were found on Monday with their throats cut after being ambushed by militants.

Mosaique FM radio and Nessma television said the clashes were centred near Bir Ouled Nasr Allah, while the authorities maintained their customary silence on military operations.

Monday’s deadly attack on the soldiers has prompted Algeria’s army to reinforce its presence along the border.

Interior Minister Daho Ould Kablia said in Algiers this action was taken because of “the troubles that Tunisia is going through”.

Tunisian troops have intensified their hunt for gunmen in the Mount Chaambi area since the spring, after several members of the security forces were killed or wounded by explosive devices.

Algiers has strongly condemned what it called “the base act of terrorism that resulted in several deaths among the Tunisian armed forces” on Monday.

The latest military operation came as leaders in Tunis started talks with opposition and civil society representatives to try to defuse the political crisis sparked by the July 25 murder of opposition MP Mohamed Brahmi.

The killing has been blamed on Islamists, with a connection made to the February murder of fellow opposition head Chokri Belaid — the same gun was used in both killings.

Suspects in the Brahmi have been named but so far there have been no arrests.

As the political crisis enters its second week, thousands of supporters and opponents of the government have been holding rival street protests every night after breaking the Ramadan fast.

President Moncef Marzouki, a secular ally of the ruling moderate Islamic group Ennahda, was on Friday meeting leaders of several parties which have demanded the coalition government step down in the wake of the killings but without presenting a joint opposition front.

And Prime Minister Ali Larayedh of Ennahda held talks with the head of the General Union of Tunisian Labour (UGTT), Houcine Abassi, whose organisation called a general strike earlier this week and is demanding the formation of a government of technocrats.

Larayedh has called a December 17 general election, ruling out a resignation of the Ennahda-led cabinet, which detractors charge has failed to rein in radical Islamists accused of a wave of attacks since the 2011 revolution which overthrew president Zine El Abidine Ben Ali.