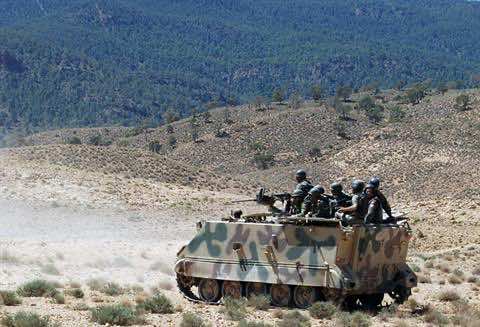 Tunisian forces launched a land and air operation against Islamist militants near the Algerian border on Friday, the military said, as Tunis battles a crisis sparked by a political slaying.

He said the assault was mounted after clashes on Thursday night between soldiers and “a terrorist group,” referring to fugitive Islamist militants.

“We have not killed or arrested any terrorists” to date, he said, without giving a number for the hunted militants.

A military source on the ground earlier told AFP “the terrorist group is surrounded” in the area, where eight Tunisian soldiers were slain this week.

He said helicopters had carried out air strikes.

“Either they give themselves up or they will be killed,” he said.

The attack took place around 16 kilometres (10 miles) from the town of Kasserine, near Mount Chaambi, where the soldiers were found on Monday with their throats cut after an ambush by militants.

Mosaique FM said the raids were aimed at destroying militant hideouts. The explosions could be heard in Kasserine.

Tunisian troops have intensified their hunt for gunmen in Mount Chaambi since the spring, after several members of the security forces were killed or wounded by explosive devices.

A military source also said Friday that a group of Salafists, a hardline branch of Sunni Islam, were arrested in a Kasserine mosque.

This week’s gruesome attack on soldiers has prompted the army in neighbouring Algeria to reinforce its presence along the border.

With the authorities admitting an increase in Islamist extremism, the Tunisian interior ministry on Friday announced the arrest of an “extremist” who lost his hand in an accidental explosion.

“A unit on Thursday night arrested an extremist who was handling explosive substances and blew his hand off,” it said.

The latest violence came as leaders in Tunis opened talks with opposition and civil society representatives to try to defuse the political crisis sparked by the July 25 murder of opposition MP Mohamed Brahmi.

The killing has been blamed on Islamists, with a connection made to the February murder of fellow opposition head Chokri Belaid — the same gun was used in both killings.

Suspects in the Brahmi case have been named but so far no arrests have been announced.

As the political crisis enters its second week, thousands of supporters and opponents of the government have been holding rival street protests every night after breaking the Ramadan fast.

President Moncef Marzouki, a secular ally of the ruling moderate Islamic group Ennahda, has been meeting with leaders of several parties demanding the coalition government’s resignation in the wake of the killings.

But the opposition has failed to present a united front.

And Prime Minister Ali Larayedh of Ennahda held talks with General Union of Tunisian Labour (UGTT) head, Houcine Abassi, whose organisation called a general strike earlier this week and wants the formation of a government of technocrats.

Larayedh proposes enlarging the coalition, ruling out a resignation of the Ennahda-led cabinet, which detractors charge has failed to rein in radical Islamists accused of a wave of attacks since the 2011 revolt ousted president Zine El Abidine Ben Ali.

He has called a general election for December 17.

The authorities have pointed to links between the Chaambi militants, the assassins of Brahmi and Belaid and Tunisia’s main Salafist organisation Ansar al-Sharia, which denies the accusation.