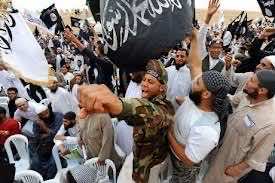 Tunisia’s army pressed ahead Saturday with operations against Islamists in a remote mountain range after a deadly ambush on its troops heightened a crisis sparked by a political assassination.

The authorities kept a tight lid on the overland and helicopter raids launched Friday in the Mount Chaambi area near the border with Algeria where Islamist militants including veterans of a revolt in northern Mali are suspected to be hiding out.

Eight Tunisian soldiers were found in the area on Monday with their throats cut after being ambushed by militants.

The interior ministry, meanwhile, said a “religious extremist” was killed and another wounded in two separate incidents while handling explosives.

And police said a suspect package was found in Tunis warning security forces to withdraw from Mount Chaambi.

The coalition government led by moderate Islamic movement Ennahda has acknowledged that the country faces a growing threat of terrorism, although it has yet to issue a call for the public to remain vigilant.

On the political front, a compromise still eluded opponents and supporters of the government in their efforts to defuse a crisis triggered by the July 25 assassination of opposition figure Mohamed Brahmi that has been blamed on jihadists.

Opposition parties have called on the government to step down but failed to draw up a united stand on policy.

Ennahda insists on its legitimacy to govern based on the last elections in October 2011.

Both sides in the political stand-off staged daily demonstrations over the past week, with Ennahda sending out calls for a mass solidarity rally in the capital’s Kasbah Square from 9 pm (2000 GMT) on Saturday.

The government’s critics say it has failed to rein in radical Islamists, who have grown in influence and stand accused of a wave of attacks since the 2011 uprising which toppled long-time president Zine El Abidine Ben Ali.

Since Brahmi’s death — the second political slaying after leftist leader Chokri Belaid was gunned down in February — around 60 politicians have pulled out of the National Constituent Assembly that is drawing up Tunisia’s long-delayed new constitution.

Tunisian authorities have pointed to links between the Chaambi militants, the assassins of Brahmi and Belaid and Tunisia’s main Salafist organisation Ansar al-Sharia, which denies the accusation.