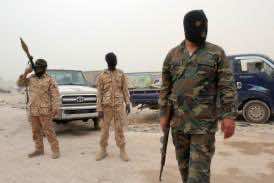 A senior police officer was seriously wounded in an overnight bomb attack in Libya’s restive second city of Benghazi, a security official told AFP on Saturday.

The blast was the latest in a string of attacks on members of the security forces and judiciary in eastern Libya.

He said the officer had been returning to Benghazi from the southern city of Sabha to visit his family when the blast happened.

“The same method was used as in other attacks on members of the security forces — a home-made bomb planted in the car,” Hijazi said. “These attacks are well-planned and systematic, and show that police and army officers are under surveillance.”

After a short chase, the attackers were arrested and taken to special forces’ headquarters for questioning, he added.

“The detainees could lead to the identification of perpetrators of the attacks and killings in the city of Benghazi in recent days,” Boukhamada said.

On Wednesday, an army colonel was shot dead in the eastern town of Derna, while another was seriously wounded in a second attack in Benghazi.

Since the fall of dictator Moamer Kadhafi in 2011, the east has seen a wave of attacks against members of the military and police and judges who served under the former regime.

Benghazi was the cradle of the uprising two years ago, and attacks there are generally blamed on radical Islamists who have also targeted Western interests.

Last September 11, US ambassador to Libya Chris Stevens and three other Americans were killed in an attack on Washington’s consulate in Benghazi.

And on June 5, an attempt was made to kill Jean Dufriche, France’s honorary consul in the city.

On Friday, five people were wounded when an explosive device detonated outside a police station in the Sidi Hassan district of Benghazi, Hijazi said.