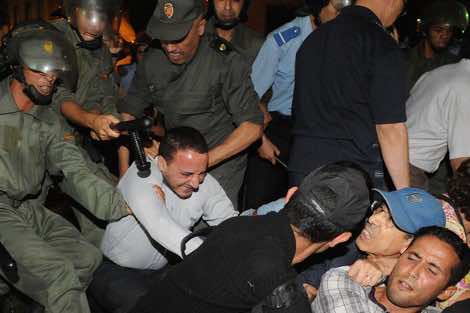 A peaceful rally was scheduled on Friday in Rabat to condemn the release of the pedophile and rapist Daniel Fino Galvan, a Spanish national, of Iraqi origin, who was granted a royal pardon in spite of his horrendous crimes: raping and filming 11 children between the ages of 3 and 15.

This decision outraged Moroccans everywhere and the entire country denounced the pardon, which hurt our dignity and completely disregarded our conception of justice. The royal palace has attempted to repair this blunder by claiming it fired a high official who was in charge of the pardon process. However, such a move reeks of predictability and damage control, and it has done little to quell the outrage of the Moroccan people and the international community.

The protests were organized by activists from the February 20 Movement, the Moroccan Association of Human Rights (AMDH) and by different groups on social networks such as Facebook and Twitter. The protestors rejected this royal pardon and demanded its cancellation so that Daniel Fino Galvan would be brought to justice for his crimes. Moreover, people demanded that procedural regulations regarding the royal pardon of prisoners be amended. Like many procedures associated with the royal palace, it is shrouded in secrecy and difficult to criticize in Moroccan political culture.

However this has not stopped the courageous mobilization of civil society members, such as the Association of Justice, who demanded that the list of prisoners being considered for a royal pardon must be supervised by human rights monitors. The police reaction to this peaceful rally was nothing short of violent and aggressive. Tens of protestors were badly beaten, though this part of the protest was not widely diffused in the Moroccan media. Police officers used truncheons to beat up the people in order to prevent them from gathering and chanting slogans.

Many well-known Moroccan activists were also physically abused by the police. Journalists were injured and their cameras destroyed. How dare they say that Morocco is a country where there is freedom of speech? I see no freedom whatsoever! I only see injustice and oppression. We have no right to speak our minds and make our voices heard. We are not allowed to say how we feel and we are forbidden to stand against decision-makers even when their decisions stain our dignity.

This violent intervention by the police force, I believe, was yet another strategic blunder in the government’s reaction to this injustice. People now want to fight not only for justice, by calling for Daniel Galvan to go back to prison, but to also fight for greater freedom of expression. Now, the issue has become even more serious, leading to many more discussions and future protests.

Some see this as a catalyst for chaos, a road that so many Moroccans do not want to travel. Others, and this includes a growing number of Moroccans from all backgrounds, think that this should cultivate a true debate on the lack of an independent judiciary and curbing the powers of the royal palace. People want freedom, they want social justice, and they want a true Democracy.