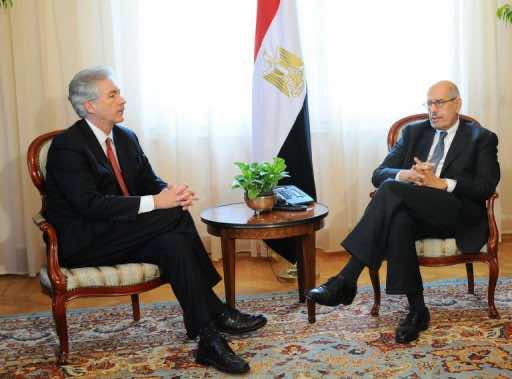 A US envoy met Egyptian officials Saturday amid efforts to find a peaceful solution to the stand-off between supporters of ousted Islamist president Mohamed Morsi and the army-installed interim government.

The talks come as tensions mounted over the looming break-up of two Cairo sit-ins by Morsi loyalists which have paralysed parts of the city and deepened divisions.

“There is no desire to use force if there is any other avenue that has not been exhausted,” Fahmy told reporters after talks with Burns.

Egyptian officials appeared to have softened their tone in recent days, stressing the need for political reconciliation after Morsi’s July 3 ouster by the military.

“There is an open invitation for all political forces to participate. The door is open for everybody including the Brotherhood to participate in the process… If the political landscape does not have space for everyone, it cannot be an inclusive democracy,” Fahmy said.

His comments came after the interior ministry urged pro-Morsi demonstrators to go home, saying this would allow the Brotherhood to return to politics.

It warned however that protesters’ “continued presence will expose them to legal action over their involvement in several criminal acts by some in the gatherings, including killing, torture, kidnap, carrying weapons… and incitement to violence”.

The ministry accused protest leaders of trying to “control the mind” of protesters by providing only selective information from podiums and cutting them off from the outside world.

Burns’s visit is his second since the Morsi’s ouster, and comes after EU foreign policy chief Catherine Ashton visited to help broker a peaceful solution.

Morsi loyalists vowing to keep fighting for his reinstatement staged defiant rallies on Friday, but plans for four later marches fizzled out after police dispersed a new sit-in outside the Media Production City in a Cairo suburb.

“Crusaders and secularists and the Americanised army have converged … with Gulf money and American plotting to topple Mohamed Morsi’s government,” he said in an audio recording posted on jihadist forums.

In his first comments since the coup, Zawahiri also attacked Morsi’s secular opposition and Coptic Christians, who he said wanted a secessionist state in Egypt, and called for a mass movement to instal Islamic law.

Morsi supporters marched after Friday prayers, pouring out of several mosques in Cairo.

An early evening protest outside the media city descended into mayhem, with at least one protester wounded by birdshot.

Police fired tear gas at protesters who had set up tents and brick fortifications outside the compound. The protesters responded with stones.

The interior ministry accused protesters of firing birdshot, wounding a conscript, and said police made 31 arrests.

Witnesses also reported clashes between residents in the Alf Maskan area and Morsi loyalists after they tried to establish a protest site.

Morsi’s supporters have remained defiant in the face of mounting threats from the interim government.

Vice President Mohamed ElBaradei called for a halt to violence in an interview with the Washington Post.

His supporters have been angered by comments from US Secretary of State John Kerry, who has said that Egypt’s military was “restoring democracy” when it ousted him.

Prosecutors have also referred three top Brotherhood leaders, including supreme guide Mohamed Badie, for prosecution on allegations of inciting the deaths of demonstrators.

Morsi has been held at an undisclosed location since the coup.