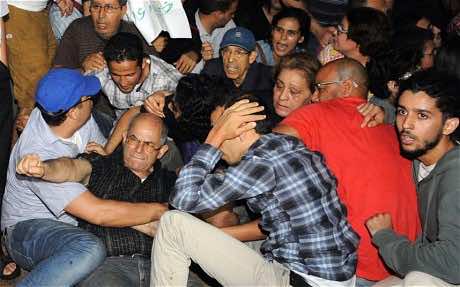 There are many valid as well as unsound reasons for which Morocco was labeled as the “exception” since the tide of the uprisings swept over the Arab world. This appellation may hold true if the term “exception” is used to denote the lack of insurgency and instability.

But beyond the log of eulogist expressions, lies a bitter reality. The battle for a fully fledged democracy in Morocco is not over for the simple reason that the “Zerwata” (Name for police baton in Moroccan Arabic) is still an imminent threat to the skull of dissenters and peaceful demonstrators. The grim shadow of the “Years of Lead,” a period of arbitrary arrest marked by excessive use of violence against political dissidents, is still weighing on the subconscious of Moroccans and the image of the merciless crackdown on protestors is still vivid.

Just when everyone starts to believe that Morocco is an unparalleled model of democracy in the region, the reality floats back to the surface. It is true that those comparisons with the unrest in other Arab countries like Syria and Egypt can be informative; nevertheless they can function more as a straight jacket trying to make a hideous reality fit into a beautiful frame. The royal amnesty granted to the Spanish pedophile Daniel Galvan, as an attempt to consolidate diplomatic relations with Spain, engendered uproar among Moroccan youth and NGOs.

Indeed, nobody can relish the idea that a perverse criminal who raped 11 Moroccan children can enjoy freedom and a royal pardon at the same time. But what is even more deplorable in this whole situation is to see once again the right to freedom of expression and peaceful demonstration trampled by the authorities in total impunity. Behind the beautiful façade that the state sponsored media and foreign news outlets try to paint, the reality is less reassuring.

The so much awaited social reforms turned out to be a hazy mirage in the midst of an arid desert. Corruption endures from the mundane administrative transaction to the most lavish deals sealed behind closed doors. And to add a layer of complexity, freedom of expression remains in “custody” every time the voices of dissent are raised. The irony behind all this is that the government that the people have elected is more crippled than ever. Our ministers like to shelter themselves in a brooding and complacent silence each time the authorities commit such brutality against disarmed protestors.

The government that cannot question the security apparatus over these abuses, conduct serious investigations, and above all fails to put substantial reforms on the right track is a government totally out of sync left in the dark with restricted prerogatives. The Equity and Reconciliation Commission created in 2004, was initially set to restore justice for Human Rights victims at least by acknowledging the actual occurrence of these offenses. But how can a nation reconcile with its grim past while it does not miss the opportunity to reinvent those brutal scenes in the present.

There is a sharp incongruence between the idyllic image that is being circulating about the progress of liberties in Morocco and the current state of affairs. This schizophrenic stand towards democracy reveals the existence of two disparate propensities, one motivated by the need to shine in international meetings and brag the good will to join modern and democratic states; whereas the other is manifested in an inexorable predisposition to control people and to silence dissenters at all costs.

For those who like showers of praise, there is nothing exceptional about brutality and oppression that one can brag about. This hidden face of the Moroccan institutions is still ugly and threatens to spoil the beauty of the snapshot we try to sell to the world.