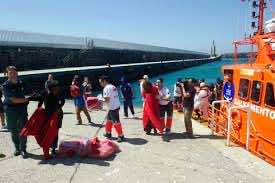 A catamaran ferry from German-based FRS ferry lines spotted the dinghy about 10 nautical miles southwest of the Spanish port of Tarifa and picked up the migrants, the coastguard said in a statement.

The migrants, all of them men, were taken to Tarifa, which is located across the Strait of Gibraltar facing Morocco. All of them were in good health.

FRS ferry lines operates catamaran ferries — which can fit up to 800 passengers and 185 cars — linking Tarifa and the Spanish port of Algeciras to Tangiers in Morocco.

The Strait of Gibraltar separates Spain and Morocco by only 15 kilometres (nine miles) — a ferry ride between the two continents takes roughly 35 minutes — making it one of the key smuggling routes for illegal migrants crossing into Europe.

Last year, 3,804 immigrants reached the Spanish coast by sea, 30 percent  fewer than in 2011, according to the Spanish interior ministry.