CAIRO- Ahmed Hussein dismissed reports that Badie suffered a heart attack in Tora Prison, south of Cairo, saying he was in good health. 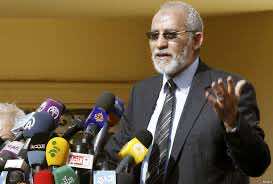 CAIRO- Ahmed Hussein dismissed reports that Badie suffered a heart attack in Tora Prison, south of Cairo, saying he was in good health.

Egypt’s Muslim Brotherhood leader Mohamed Badie, currently held over several charges, met with visiting family members for the first time since his arrest, and complained to them about being held in solitary confinement, his son-in-law said Sunday.

Ahmed Hussein dismissed reports that Badie, 70, suffered a heart attack in Tora Prison, south of Cairo, saying he was in good health.

“The only thing that Badie complained about is being held at solitary confinement, without being allowed to leave his cell or meet anyone of other detained Brotherhood members,” Hussein told on Freedom and Justice Party (FJP) website.

Only Badie’s wife and daughter were allowed to visit the Brotherhood leader who told them that, during his arrest, he received a punch in the face, which removed his glasses and dentures, Hussein said, noting that Badie got them back days later.

Badie along his two deputies, Rashad al-Bayoumi and Khairat al-Shater, faces charges of “inciting violence and murder” in connection with clashes outside the group’s Cairo headquarters earlier this year in which ten people were killed.

He was taken to the high-security Tora prison, where many other detained group leaders have been kept since the military’s July 3 overthrow of President Mohamed Morsi, who himself hails from the Brotherhood.

Egyptian authorities have unleashed a massive crackdown on the Islamist group since the violent dispersal on August 14 of two pro-Morsi sit-ins, in which hundreds of demonstrators were killed.