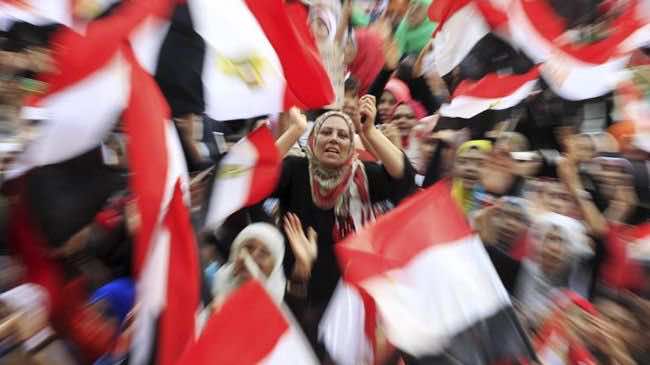 A top African Union official said Sunday the Muslim Brotherhood must join the political roadmap proposed by Egypt’s new authorities, in a bid to end the violence rocking the country.

Diletta Mohamed Diletta, former premier of Djibouti and member of an African Union panel currently in Egypt to assess the situation in the country, told AFP it was “important and necessary” that the Brotherhood joins the nation’s political process.

“We need to keep negotiating and make it (Brotherhood) understand that it needs to be on board” in implementing the roadmap detailed by the new authorities after the military’s ouster of Islamist president Mohamed Morsi in July.

The transition plan, set up by Egypt’s interim president Adly Mansour, would see fresh parliamentary elections in the coming months, with a presidential vote possible by early next year. The Brotherhood has rejected the plan.

On Sunday Mansour announced a 50-member panel to draw up a revised constitution but without the inclusion of ousted Morsi’s Muslim Brotherhood which declined to take part.

The African Union suspended Egypt’s membership after Morsi’s ouster but the delegation visiting Cairo for talks with political and civil groups is expected to make its recommendations on whether the suspension should be maintained or withdrawn.

Diletta said the three-member delegation was “assessing the situation and has talked to the Muslim Brotherhood so it can join the implementation of the roadmap”.

“There may be divergent views but nobody rejects” the Brotherhood’s participation in the political roadmap, Diletta said.

“We are trying to encourage them to join in. We met their representatives. The situation has not changed as many of their leaders are in prison,” he said.

The new Egyptian authorities launched a massive crackdown the Brotherhood and has arrested its top leaders.

Morsi himself is also detained and on Sunday state television said he will stand trial for “inciting murder”.

Diletta said representatives of the Brotherhood made several complaints during talks with the African Union delegation.

“They want their people released, television channels restarted. They say they are the victims and are being attacked. These are their claims. We are telling them to make concessions in order to move forward.

“They must realise that the previous situation (reinstating Morsi) can’t return. They have to be ready for dialogue.”

Diletta said Egypt’s army chief General Abdel Fattah al-Sisi told the delegation that Morsi’s ouster was the result of an appeal made by the people.

Dilletta said there was a general desire in Egypt to have the Brotherhood take part in political talks with other sectors of society and the government.

“At no moment or level we have seen any official or civil society member rejecting the Muslim Brotherhood,” he said.

“So it is clear that the ball is in the court of the Muslim Brotherhood. It is up to them whether they want to go underground or participate in the political future of Egypt.”

Dilletta said the African Union was keen that violence in Egypt ends and “people talk to each other”.

“Egypt must find its place in Africa but to arrive at that the two groups — authorities and their allies and the Muslim Brotherhood and its allies have to reconcile and sit together and talk.”