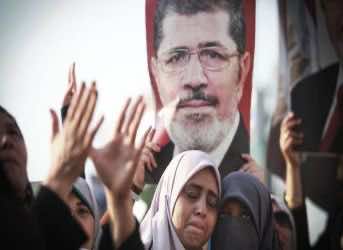 Egyptian Islamists backing ousted president Mohamed Morsi have called for demonstrations across the country on Tuesday, two months since he was toppled by the military.

The call comes a day after Egypt’s interim president Adly Mansour announced a panel to draw up a revised constitution but without the inclusion of Morsi’s Muslim Brotherhood which rejected to take part.

In a statement issued early on Monday, the Anti-Coup Alliance which is led by the Brotherhood said Tuesday’s demonstrations would be held under the slogan: “The coup is terrorism,” to mark Morsi’s July 3 ouster.

The alliance “calls for active participation in these demonstrations and other activities aimed at achieving the return of Morsi,” the statement said.

On Friday, the alliance organised protests in support of the deposed president but mustered far fewer participants than expected.

The Muslim Brotherhood, the main group organising the protests, has lost its ability to mobilise supporters in large numbers because of sweeping arrests which have netted its top leaders among at least 2,000 Islamists detained since August 14.

On Monday, the Anti-Coup Alliance also said its members in Europe are documenting evidence against those who removed Morsi.

“The free Egyptians in Europe are documenting the crimes of coup leaders so they can be presented in the International Court of Justice,” the group said.

Morsi, Egypt’s first democratically elected president, served for only a year before the military ousted him in the popularly backed coup.

On Sunday, Mansour announced a 50-member panel to draw up a revised constitution.

But the Brotherhood has declined to take part, and reflecting the deep divisions plaguing Egypt, state television announced later on Sunday that Morsi is to stand trial in a criminal court for “incitement to murder”, along with 14 other members of the Islamist movement.

The constitutional panel has 60 days to submit a final version of the revised charter to the interim president, who in turn has 30 days to announce the date of a referendum.