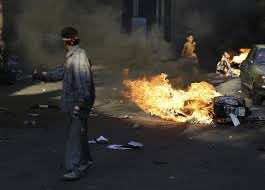 A bomb hurled from a bridge at a police station in the Egyptian capital on Monday wounded two civilians, a security official told AFP.

“Unknown assailants lobbed a bomb from a bridge in the direction of a police station in western Cairo,” the official said on condition of anonymity, adding that two civilians were wounded in the explosion.

The same police station was targeted by gunfire on Saturday.

Attacks against security forces have been on the rise, with the interior ministry saying more than 100 policemen have been killed since a deadly August 14 crackdown on supporters of ousted president Mohamed Morsi.