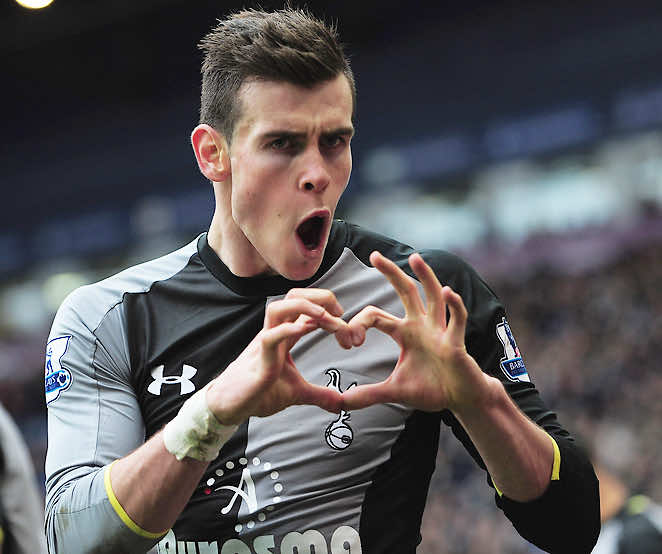 Gareth Bale hailed his move to Real Madrid as a “dream come true” as he was officially unveiled in front of 20,000 fans at the Santiago Bernabeu on Monday.

Bale’s prolonged transfer from Tottenham Hotspur was finally completed on Sunday evening with reports in England suggesting the Welshman had become the most expensive player of all time at 101 million euros ($133.5 million, £86 million).

And the 24-year-old has already targeted winning the Champions League this season as his main goal.

“It is a dream come true for me to play for Real Madrid,” he said in Spanish, to the delight of the local fans.

“I hope to be able to help the team have success and win the 10th European Cup this year.”

Bale then took to the pitch at the Bernabeu for the first time in his new Real kit to perform a series of tricks and to kick balls into the stands for the adoring fans.

Real Madrid president Florentino Perez had earlier welcomed Bale to the club and repeated Spurs chairman Daniel Levy’s sentiment that the player’s desire to move to Madrid had played a key role in the deal.

“We are in this temple of Real Madrid to incorporate a new man who knows very clearly what are the values of this club,” Perez said.

“A man who has been chosen as the best player in the Premier League last season. A young footballer but with great qualities, committed to the sport and whose dream has been to be a Real Madrid player.

“Gareth you are going to help us to make the legend of this club even greater and stronger. This is your stadium, your shirt, your badge and your fans. From today this is your home.”

The 24-year-old arrived in the Spanish capital on Sunday night before undergoing a medical on Monday morning, which he passed without any problems despite not having played since mid-July due to an apparent foot injury.

“The truth is that he has arrived in excellent physical condition and is at the disposition of the coaching team for use whenever they think it is convenient,” Carlos Diez, head of Madrid’s medical team, told the club’s website.

“I would underline his physical condition. He has come to the club marvellously in this sense and I think he is going to take advantage of that very well.”

Bale is due to report for international duty with Wales on Tuesday ahead of their World Cup qualifiers against Macedonia and Serbia in the coming week.

However, Madrid sports daily Marca reported that Real were set to ask the Welsh FA to release him back to the club so that they can put him through their own mini pre-season training programme to ensure that he is match fit to make his debut in their next league game against Villarreal on September 14.